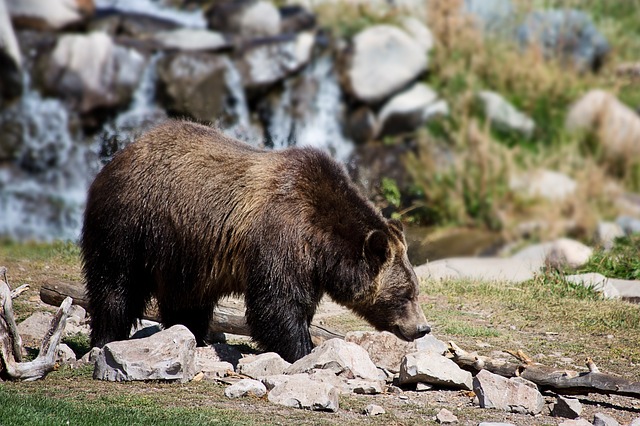 Most of the time our focus is on self-defense against two legged animals, not necessarily those you may encounter in the wild. However, there is definitely an application for concealed carry while in the woods to protect yourself against bigger, furry things who want to eat you, or even just protect their young.

Our good friends over at Ammoland have been documenting many different bear attacks that have helped us all come to certain conclusions about self-defense against a wild animal.

The first conclusion is that bear spray doesn't always work. In fact, as we've seen in their latest story where two groups of men were attacked by what they're calling the same bear, all the spray did was piss it off.

It's being reported that the first group of men used bear spray during an active grizzly attack, with lackluster results as can be seen by the quote below:

The first attack happened about 7:30 a.m. when two archery hunters from New Mexico were following elk tracks south of Cottonwood Creek, west of Black Butte. The two men said they were walking single file up a hill when they heard a noise. They both turned to see a bear charging toward them. The bear struck one of the men as the other was reaching for his bear spray. The man fell to his hands and knees, then the bear grabbed onto his backpack.

The other man deployed bear spray at the bear. When the spray reached the bear’s face, the bear let go of the first hunter and attacked the other hunter. The man continued spraying the bear’s face, and the bear eventually let go and left.

They were both injured, but were able to walk back to their car and leave. Notice that all important part where the second guy sprayed the bear and it stopped attacking the first dude to attack him. In other words, all he did was piss the bear off.

Sadly, it stayed pissed because it attacked another group of hunters about 11 hours later only about one mile away. The key difference here is that these guys used their pistols for defense.

“I heard the bear catch Donivan before I actually saw it,” he describes, “and it’s a scream I hope that I never have to hear ever again in my entire life.”

Donivan was on the ground when Gregersen reached him carrying a gun, pulling the trigger just in time.

“I could feel his mouth right behind my head,” Donivan said.

If Gregersen did not shoot, Donivan says he would have been killed.

“I would not be sitting here. I'm 100 percent convicted of that,” he said.

Gregersen says he saw the bear crawl across his friend as it tried to bite him. Donivan was pushing the bear’s face away when Gregersen approached and shot the bear, temporarily scaring it away.

The hunters say the bear kept coming back to attack.

“It charged again just as quickly as it did the first time,” Gregersen explains, “We have never seen an animal that was that furious, that was that terrifying.”

After shooting the bear multiple times, the friends were able to escape.

All any of us can do is use the tools and skills we have at the time of an attack, no matter the kind of animal attacking us. Thankfully, these two men had 9mm pistols they were able to deploy and defend themselves with.

They had to shoot the bear several times to get it to stop attacking, but they were able to stop the attack. The most important thing about self-defense against any type of animal is having a gun that you can use effectively to protect yourself.

Less important is the caliber of gun, and more important is the ability to hit your target. Ammoland has conducted some research and found out that just about any caliber of handgun can be effective against a bear. The ammo you use, however, is another key.

Rarely is it a good idea to use hollow points against a thick skinned animal like a bear. What you're looking for is penetration, not so much the expansion. Therefore, Full Metal Jacket ammunition is actually a better option than hollow points, with hard cast bullets being the best to help you get into that animal as far as possible.

Finally, this also proves the truth that there is strength in numbers. I can hardly think of a time when it'd be a good idea to go into brown bear country by myself. Even where I live in the Blue Ridge Mountains with black bear nearly everywhere, I always have a gun on me and tend to go with at least one other person.

That way, should the unthinkable happen, we stand a fighting chance.