You may be surprised by what you find inside your flashlight when it is time to replace the batteries. Chances are, you won't pull out the well-known 1.5 volt AA, AAA, or D cell batteries. Instead, you will likely find a short, thick battery labeled 123, CR123, or CR123A. I hope to clear up the difference between disposable batteries referred to as 123, CR123 or CR123A batteries, and their rechargeable counterpart the 16340 and the larger 18650 batteries which are becoming more popular. 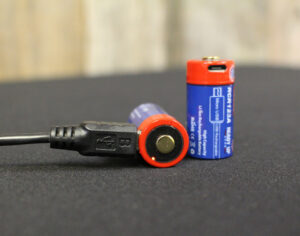 When searching for 123 batteries, you might come across ones labeled CR123 or CR123A. Don't worry. These batteries are all interchangeable, and there is no operational difference between them. They are all lithium chemistry batteries with a nominal voltage of around 3.0 volts and a capacity ranging around 1000-1500 mAh.

I have found the most common designator for these batteries is CR123A.

The difference comes down to companies trying to differentiate their batteries from another's. You may also see them labeled: SF123, EL123, DL123. Again, don't worry. It is the “123” label that describes the proper size and voltage.

Why Do Tactical Lights Use Mostly CR123s:

Manufacturers almost exclusively use the 123 battery in their tactical flashlights. There is one major reason for this–they pack more voltage and greater capacity for their size than their more common alkaline counterparts.

They also perform better in high-output, high-drain applications which is exactly what a high-lumen tactical flashlight requires.

But lithium batteries have some practical downsides.

CR123As and Other Lithium Batteries are Expensive:

123 batteries are expensive. If you buy a package of two of them at your local store, they will run you about $10. This makes the cost PER BATTERY about $5 EACH. You can buy them in bulk online, but they will still cost you a minimum of $1.50 a piece and usually more like $2.00 each. And anyone who uses their CR123 equipped flashlight will tell you that the batteries have good output but don't last particularly long.

I found myself not wanting to use my flashlight as much as I would have if the batteries weren't so dang expensive. This practice calls into question how practical my flashlight is if I only turn it on if I absolutely have to. 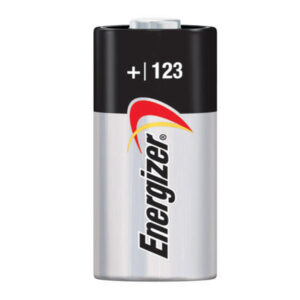 Energizers call their battery a CR123, but others sometimes add letters to the name. The important designator is 123.

The 16340 battery is almost exactly the same size as a CR123A battery. Those with protected circuits (which is strongly recommended for safety such as these ones here) are actually about 1-2 mm longer than a CR123A, but they will still fit in most applications. More about that down below. The nominal voltage of a single 16340 battery is 3.6 or 3.7 volts, and the capacity is usually somewhere around 650-750 mAh. They will often last for 800-1000 recharge cycles under optimum conditions when they are taken care of, but in all honesty real-world use is more likely to see 300-500 cycles.

The 18650 battery is almost exactly the same length as two CR123A or 16340 batteries. It is approximately 2 mm thicker. These batteries are actually quite common although you may not see them with your eyes very often. They are often used in rechargeable battery packs, electric scooters and bicycles, and even in some electric cars. They have the same nominal voltage as the 16340s of 3.6-3.7 volts but a much greater capacity typically of about 2200-2600 mAh. They are typically about the same as the 16340 batteries in terms of recharge cycles.

As was mentioned, the 16340 battery is nearly identical in appearance to the 123 batteries. The increased voltage of the 16340 rechargeables will sometimes give your light a performance boost. An example of that is with the Ready Up Gear MCF Spark Flashlight that is rated for 400 lumens of output with a standard CR123A, but with a 16340 battery the output increases to 550 lumens.

Flashlights that use a single 3-volt CR123 should be able to handle the extra 0.7 volts the 16340 provides, but you will want to confirm this with your light's manufacturer. For those lights that use (2) CR123A batteries, you'll especially want to check compatibility with 16340s because swapping out two CR123As with (2) 16340s is increasing the voltage by at least 1.2 volts. Some lights handle this just fine, but not all will.

The 16340 battery has a higher up-front cost as rechargeable batteries always do. A single 16340 may cost around 10 dollars compared to $2 – $4 for the 123 battery. However, given the 16340 can be recharged typically around 500 times, it is apparent that in the long run, you will save money. You will only need to recharge them about 6 times before you start seeing a return on your initial cost investment.

For me, in a few of my most used flashlights, the 16340s have been a perfect replacement for the usual CR123A batteries.

There is always a consideration, it seems. The 16340 battery is around 1/16″ longer than the 123. The added length can cause some fitment problems with your light, such as causing the light not to turn on when pressing the tail cap. I don't have a list of which brands have specific issues with the 16340 and which do not.

But in these cases, you may be able to back your tail cap off a turn or so and get it to work consistently. Because backing off the cap accommodates for the slightly longer 16340, the tail cap functions as it should. 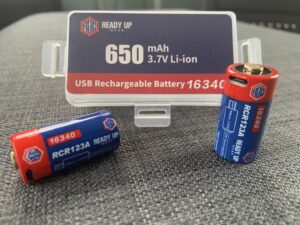 Some flashlights have a larger internal body diameter and may be capable of accepting the 18650 rechargeable batteries. For those lights that fit this category, you may be able to replace two CR123A lithium batteries with a single 18650 battery.

One thing to understand about this is that the 18650 provides 3.7 volts as opposed to a combined 6 volts of the two CR123 batteries. Again, you'll need to confirm compatibility, but this should be simple for you to check since the voltage of one 18650 is less than two CR123As, you won't cause any damage to the light. Many quality lights have internal voltage regulation that is able to compensate for varying voltages whether high or low. The light with an 18650 will either function normally, normally with reduced lumen output, or it won't turn on at all due to too low of voltage. 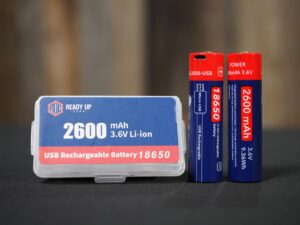 How to decide on whether disposable CR123A batteries or rechargeable 16340/18650 batteries are right for you.

Here are some important considerations in favor of CR123A lithium batteries:

Here are some important considerations in favor of rechargeable 16340 or 18650 batteries:

And if you're curious, here is a comparison of different CR123A batteries available from various companies compared to the 16340. The ones I linked to are from ReadyUpGear, and I find them to be fantastic. As the chart shows, you can save a lot of money by going to rechargeable batteries.

All that said, it doesn't hurt to keep a few 123 batteries as backups. Because if you don't have a source of electricity, you're out of luck once the rechargeables run out of juice. Redundancy is a good thing when it comes to powering things like flashlights.

I hope this clarifies the difference between all these battery options. It can be confusing, and I even get lost sometimes myself. However, I hope you can use this as a reference to find something that works for your needs.

You may also want to check out the MCF Spark flashlight. It accepts the 16340 batteries, is modular, and a nice, small option for a pocket.