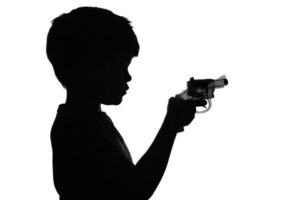 In Indianapolis, a tragic and easily avoidable accident occurred as a 4-year-old girl shot herself and her mother in the head Sunday morning on the city's north side after the young girl got a hold of a gun from a nightstand.

A spokesman for the Indianapolis Metropolitan Police Department stated that “When officers arrived, they came into contact with the father of the 4-year-old who stated that he and his fiancé were asleep when he was awakened by the sound of the gunshot”.

“The father stated that his daughter shot herself in the face, and it is believed that same bullet struck his fiancé in the back of the head.”

Luckily these injuries will not prove to be fatal, however, this situation could have ended much worse, as not only were the sleeping parents still in the room of the gun-toting child but according to the father his 2-year-old son was also in the room, but he was not hurt.  There were also other children in the residence but they were not harmed.

“Detectives are processing the scene and conducting an investigation into the circumstances that led up to the shooting,” the police release states. “Investigators have notified (Indiana) Child Protective Services for a separate investigation and the other children were released to their father.”

The 4-year-old child was transported to Riley Hospital for Children at IU Health and was in stable condition. While the mother was undergoing surgery at IU Health Methodist Hospital but was conscious and alert when she left the scene.

In the hours following the report of the shooting, the Indianapolis Metropolitan Police Department offered safety tips for all gun owners to ensure a safe environment for children and gun co-habitation:

• Take the ammunition out of the gun.

• Lock the gun and keep it out of reach of kids. Hiding the gun is not enough.

• Lock the ammunition and store it apart from the gun.

• Store the keys for the gun and the ammunition in a different area from where you store household keys. Keep the keys out of reach of children.

Now, all of this sounds like common knowledge, but it doesn't seem that this information gets through to everyone. Guns are so quickly demonized that rules for those who have guns never get talked about outside of the industry itself. It's easy to demonize an item that causes the kind of damage that we saw here in Indianapolis, but it wasn't as if the gun floated into this young child's hand and pulled the trigger. It was through a lack of knowledge and care taken by the parents that this occurred. If we could have spent more time spreading this knowledge, perhaps a case such as this, or similar incidents would not have happened.

What are your thoughts on the level of gun safety that is readily available? Where do you think we can improve? Let us know in our comment section below.