It's critical that you become proficient with your firearm of choice if you have decided to carry. The draw. The grip. Acquisition of the target. Accuracy in firing your weapon if it becomes absolutely necessary. But just as important – perhaps more so – is the cluster of tactics that surround and permeate the act of drawing down on someone in the first place.

No matter how “righteous” a shooting in which you became involved, no matter that you were not charged with a crime for having discharged a weapon; no matter that you “won” the engagement and walked away unscathed – there are still consequences for having done so. The trauma of having taken a life. The “Mark of Cain” that others may judge you by. Perhaps even a chain of events whereby relatives or friends of the person you had to draw down on have decided to even the score by taking you out – or heaven forbid – a family member.

This is not to say that when you have determined – beyond a reasonable doubt – that you must draw and perhaps discharge your firearm in order to protect yourself or someone in your care from the unavoidable danger of grave bodily harm or death – that you should hesitate for even one second in doing so.

However, the best way to “win” a gunfight is to have sidestepped it altogether. Seek to “defeat his strategy”. Ideally your awareness is such that you have avoided walking into a situation where the use of deadly force might even have to be considered. But there will be times when you aren't paying attention, where you didn't pick up on the subtle cues that are almost always present, or where something just happens “out of nowhere”. Maybe you weren't looking for trouble, but on that day “trouble came looking for you”.

Learn to take a LOT of guff

I remember many years ago when first studying in Professor Bradley Steiner's martial arts system of Jen Do Tao – American Combato – (having first taken private lessons from him in point shooting) and hearing him say frequently in class, “If you took a lot of sh.. before you came here, now you're going to learn how to take buckets of it.” Strange how over time, you get to the place where hearing a character on the street say “Your wife looks like a sweat hog!” Or, “Get out of my way, moron!” doesn't seem to have the effect on your heart rate that it used to. Bump into someone accidentally and they start swearing at you and lobbing a pair of middle fingers your way? Respond sincerely with “I'm so sorry.” (In Spanish, it would be Lo siento mucho.) Or, “I'm very sorry, I just had heart surgery” as you grasp your chest.

Some people feel it is beneath their dignity to apologize, to feign illness, to act like a “coward”. Not me. I can't think of anything that someone could say which would cause me to react with an unarmed, an armed response – or a combination thereof. Having taken several pallet boards of verbal abuse over the years, I've come to treat it as a gift of sorts – the worse it gets, the more it becomes obvious that I am dealing with someone who may just be both willing and able to place my life in danger. What I am extremely interested in though, is his behavior. A writer in Police Marksman magazine, whose name now escapes me once said something to the effect that, you should “Allow his words to drift downstream like a boat, while placing your crosshairs on his behavior.” 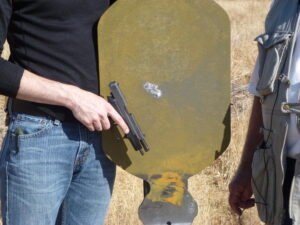 Then depending on what he does…

I am a professional writer and life-long student of fishing, the martial arts, and shooting. I have trained extensively in sighted fire, and in (my in-close self defense preference being) point shooting. I actively study Professor Bradley Steiner's eclectic martial arts system of Jen do Tao (American Combato), which informs in the use of traditional, modern weapons and the empty hand. I also study the basic movement drills embodied in Grandmaster John Perkin's system of Guided Chaos. I believe that our Second Amendment rights can best be preserved by constantly seeking to improve our tactical skills, aligning them with the laws of the land, and being both willing and able to articulate our position to others, supported by solid facts.
View all posts by David →