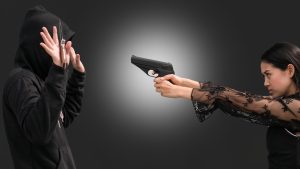 Much of the technique most people believe will work in an extreme close quarters ECQ) gunfight, is absolutely wrong.

Think about your daily routine. How often do people come inside your reactionary gap? Depending on circumstances, that distance may be anywhere from close contact, out to nearly 25 feet. Unless you don't leave your home, it's safe to say your answer would be quite often. Now imagine that the person who is 5 feet away from you brandishes a knife. I am not talking about someone trying to scare you into giving up your car keys. Rather the person moving violently toward you displaying indicators that their desire is to inflict life-threatening injury and then take whatever they can from you.

What is your response?

If you say draw my gun and place a well-aimed shot center mass stopping the guy dead in his tracks because you have a sub-second draw, I would argue that your storybook ending is more likely found in the fiction section of the library than the non-fiction. That is not to say a sub-second draw is useless and not important, far from it. Nor am I implying you shouldn't use your firearm. I am pointing out the fact that rarely do incidents play out like we think they will, and that sub-second draw to the first shot that was initiated on the range by a beep is a heck of a lot different when it is initiated by a person bent on ending your life. 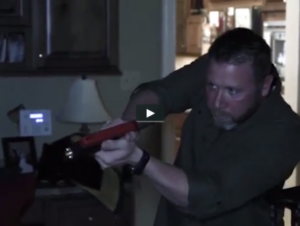 Understanding how to use your firearm in extreme close quarters is important, even if you're not in the military or an LEO.

The reality is that after your brain takes the roughly .5 – .75 seconds to identify the threat, it has to figure out an appropriate response. This takes another roughly .5 seconds, and that is if you have what-if scenarios in the past and your brain has some point of reference. If you haven't, or your brain is in condition white, you're already being stabbed.

So what should the response be? In a situation where the person is already inside the reactionary gap and has a weapon capable of inflicting injury (fists count too), you will not have the time to draw and fire before you are absorbing an attack. So you HAVE to deal with the immediate threat first, and that would be the knife in our earlier example.

Controlling the attack may mean controlling the hands, countering with blocks or strikes, or maybe countering with movement, space, and positioning. The goal is to survive the immediate attack and fight for a better position so you can use one of the force options you have. This may be a knife, yes sometimes knives are a better tool than a firearm, or it may be your handgun. Either way, you don't want to die trying to get to your gun, because you failed to realize you had options to stop the attack without the gun.

This leads me to retention shooting or the method of using your firearm in one of these incidents where you are in extremely close contact with an attacker. 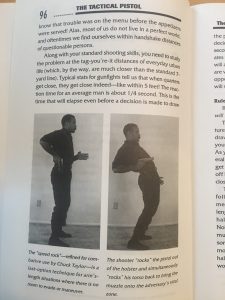 The “Speed Rock” is a technique that was designed to be fast, and applicable for close quarters. Thankfully it has been abandoned by most everyone.

People debate the many different extreme close quarters (ECQ) methods being taught. The old ‘speed rock' method which prevailed in the 90's is poor just on face value and even more so when actually put into application. Other practical methods focus on maintaining a balanced, fighting stance. But the differences in these methods are primarily targeting angles (downward toward the pelvis vs upward toward the high center chest) and other aspects like what to do with the offhand, and where/how to index the gun against your body.

What methodology is correct? It depends on what instructor you ask, and trust me there is no consensus on which technique is ‘industry standard' even among respected instructors. 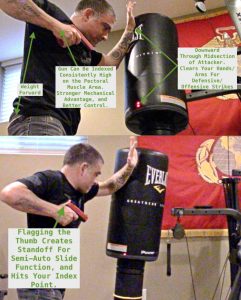 When deciding what ECQ technique you will use, consider these points.

I have an opinion on what the best ECQ techniques are. I didn't base it on the ‘position of authority' argument. What I mean is that I am proud to have served in combat as a Marine, rifleman. But I used an M-16, not an M9 while kicking doors down in An Nasiriyah. So what does one have to do with the other?

Nothing really, and I actually probably received more ECQ training in Marine Corps Security Forces training than I did as a grunt. So look beyond believing some technique is better based only on a ‘military veteran' bullet point in their resume. Additionally, for the most part, law enforcement agencies' handgun training programs are lacking in substance, especially when it comes to ECQ tactics. I am certainly not saying that military or law enforcement training is irrelevant.

Obviously, much of the best training doctrine comes from industry professionals with military and LE backgrounds. But the type of training received while serving in those positions does matter.

If you carry a handgun for self-defense you really need to learn and practice ECQ shooting techniques. So which instructors are teaching it the best? Consider this: Think of a martial art, like Karate or Ju-Jitsu. There are different techniques taught on how to counter an attack, not just one singular method? Why? Because fights are extremely unpredictable, and a single technique will likely not work as flawlessly as it did when sparring against a compliant partner not bent on ending your life. So first, think of ECQ techniques as a fluid concept of principles designed to help you win a fight. 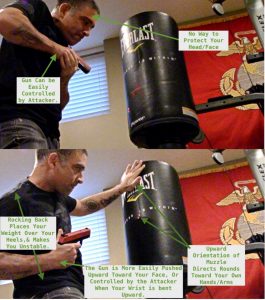 These are some points that place you at a disadvantage when using your firearm in ECQ.

To put it another way, are shooting fundamentals important? Sure, but does that mean that WHENEVER we pull the trigger we are applying every single principle in the same way? Of course not. First, we learn how to shoot, and then apply those concepts to different problems. What is applicable when we are shooting on the move vs. from a stationary position? What about when we need to fire a high precision shot vs. one from close range, where a 5″ shot group is completely acceptable?

So look at the technique being taught and think about its application: 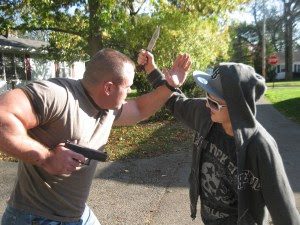 Instead of replicating a technique on youtube, my opinion is that you should seek out an instructor who is teaching a method that fits into the above framework. The reason is that these techniques are just inherently more dangerous. In addition, many ranges won't allow this type of shooting outside of a class. Certainly, it would be appropriate to train retention shooting concepts with a SIRT laser trainer or with dry-fire.

There are many other considerations that go into ECQ gunfighting. One example that I mentioned a while ago, is what happens when your semi-auto slide comes out of battery. Have you taken any formal classes where retention shooting was the focus? What techniques were presented by the instructor?

2 Responses to Using Your Gun In Extreme Close Quarters: Why Does it Matter?