Join Our Newsletter
Shop Our Store
MAIN MENUMAIN MENU
By Jacob Paulsen on September 28, 2016 in Politics 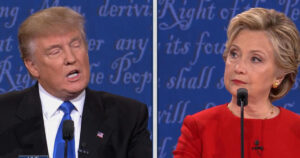 As many of you know, this Monday evening was the first Presidential debate between Republican nominee Donald Trump and Democratic nominee Hillary Clinton. It was an affair that at times got quite heated on topics surrounding taxation of the wealthy, immigration, and U.S. safety against terrorism.

But we here at USA Firearm Training were focused on what the candidates had to say about a specific topic. I'm sure you can guess what that topic is. So here are full quotes pulled from the debates, straight from the candidates' mouths regarding their stances on firearms in this country.

On Gun Crime and How to Fix It

The gun epidemic is the leading cause of death of young African- American men, more than the next nine causes put together. So we have to do two things, as I said. We have to restore trust. We have to work with the police. We have to make sure they respect the communities and the communities respect them. And we have to tackle the plague of gun violence, which is a big contributor to a lot of the problems that we're seeing today.

And I believe strongly that commonsense gun safety measures would assist us. Right now — and this is something Donald has supported, along with the gun lobby — right now, we've got too many military- style weapons on the streets. In a lot of places, our police are outgunned. We need comprehensive background checks, and we need to keep guns out of the hands of those who will do harm.

I think maybe there's a political reason why you can't say it, but I really don't believe — in New York City, stop-and-frisk, we had 2,200 murders, and stop-and-frisk brought it down to 500 murders. Five hundred murders is a lot of murders. It's hard to believe, 500 is like supposed to be good?

But we went from 2,200 to 500. And it was continued on by Mayor Bloomberg. And it was terminated by the current mayor. But stop-and- frisk had a tremendous impact on the safety of New York City. Tremendous beyond belief. So when you say it has no impact, it really did. It had a very, very big impact.

First of all, I agree, and a lot of people even within my own party want to give certain rights to people on watch lists and no- fly lists. I agree with you.When a person is on a watch list or a no-fly list, and I have the endorsement of the NRA, which I'm very proud of. These are very, very good people, and they're protecting the Second Amendment.

For the first debate, there was not terribly much spoken about guns. Of the 90 minutes, roughly 7 was devoted to the topic. However, given that gun-related issues are a part of many broader policy issues, we may see more in the coming debates. USA Firearm Training will be bringing you full quotes from the candidates so that you can see the specific stances of each of the candidates, to better make your decision come November 8th.

If you had any thoughts about the candidates and would like to discuss with us and others, please click on the below button/link and go to our Political Forum Topic about the debate.

Go to the forum topic about the Sept 2016 Debate

Episode 56: Defending Yourself Without a Gun Doesn’t Have to Be Complicated
Telecommuting: Looking to the Future of the Firearm Industry