Join Our Newsletter
Shop Our Store
MAIN MENUMAIN MENU
By Jacob Paulsen on December 17, 2015 in Politics

This month The Daily Show presented some research and thoughts to suggest that despite the cry from gun supporters, the truth is that Good Guys virtually never stop Bad Guys with guns or that Good Guys are not even generally capable or qualified to do so. I want to address the facts and opinions that were presented. 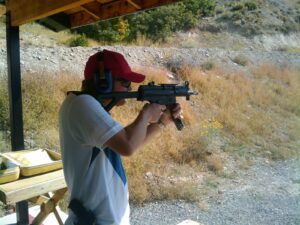 First, on the show they suggested that after an average citizen obtains the minimum required training to get a concealed carry permit, in simulators they still fail to address mass shooting situations and active shooter situations properly. They came to this conclusion based on the experience of a single member of the show. First, no decent journalist (or politician) should make claims based on the experience of a single individual. With millions of Americans armed with concealed carry permits its hardly sound to suggest from the experience of one journalist (that reports for a politically bias show) that all of the permit holders out there are unqualified.

Don't mistake my words. I heartily agree that gun owners have a responsibility (not a legal obligation) to train with and work toward mastering their firearm as it relates to self-defense in the same way that we expect anyone who gets a new job to not be good at it at first. Does that mean that we shouldn't allow people to get new jobs or embark on any new hobby or thing unless they can first demonstrate expert performance? Of course not. Everyone has to start somewhere and speaking as the owner of an organization that teaches gun classes, in person, in 15 states, instructors always teach students about the importance of ongoing training.

Next, The Daily Show uses an FBI stat to suggest that there isn't really any instance of good guys stopping bad guys. To quote:

According to the FBI's report on active shooter events between 2000 and 2013, only about 3 percent were stopped by a civilian with a gun.

The FBI report includes all events regardless if they took place in a place where a good guy with a gun is legally able to have it. The obvious solution is to remove the barriers that create no gun zones where good guys can't go with guns. Arguably, the FBI report would be more relevant to the argument if it only reported on events that took place where good guys with guns are allowed to be.

Further, a measurement of what percentage of events are stopped by a good guy is a poor way of measuring the opportunity for good guys to stop said events. In order for the statistics to be sound and relevant the report would have to analyze the number of events at which there was an opportunity for a good guy who was present and armed to stop the shooter and then measure that against how many of those events were successfully stopped by the good guy. Put differently, if the FBI analyzes 100 active shooter events and 3 of them were stopped by a good guy with a gun then it is accurate to say that only 3 percent were stopped by a good guy. However, that isn't relevant to the argument unless the report shows that all 100 events had a good guy with a gun present and that 97% of those good guys failed to stop the shooter.

In case you are curious if good guys with guns really stop crimes and shootings you won't have to look very far. You can check our archive of “Justified Shooters” to get started but there are websites that are dedicated to sharing the many daily instances of good guys with guns in action.

[Infographic] How Prepped Are You For When SHTF
Dry Practice – Dry Fire: Working on Fundamentals

20 Responses to Do Good Guys Stop Bad Guys With Guns?