Smith and Wesson is definitely on a short list of firearm manufacturing companies that even non-gun owners know. Gun enthusiasts both love and loath the company that made Dirty Harry's iconic .44-cal. Model 29 revolver. Yesterday Smith & Wesson Brands Inc. President and CEO Mark Smith, posted on social media a strong statement supporting the Second Amendment and gun manufacturers. For those who haven't forgiven the company for a foolish decision over 20 years ago? 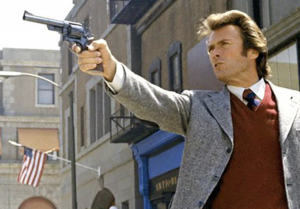 In the recent post, Mark Smith unashamedly defends S&W, the firearm industry, and gun owners, against what he believes to be slanderous attacks from “politicians and their lobbying partners in the media.” And he is completely right. Often, the anti-gun rhetoric is misstated at best, and intentionally untruthful at worst. The full text of the statement is as follows:

A number of politicians and their lobbying partners in the media have recently sought to disparage Smith & Wesson. Some have had the audacity to suggest that after they have vilified, undermined and defunded law enforcement for years, supported prosecutors who refuse to hold criminals accountable for their actions, overseen the decay of our country's mental health infrastructure, and generally promoted a culture of lawlessness, Smith & Wesson and other firearm manufacturers are somehow responsible for the crime wave that has predictably resulted from these destructive policies. But they are the ones to blame for the surge in violence and lawlessness, and they seek to avoid any responsibility for the crisis of violence they have created by attempting to shift the blame to Smith & Wesson, other firearm manufacturers and law-abiding gun owners.

It is no surprise that the cities suffering most from violent crime are the very same cities that have promoted irresponsible, soft-on-crime policies that often treat criminals as victims and victims as criminals. Many of these same cities also maintain the strictest gun laws in the nation. But rather than confront the failure of their policies, certain politicians have sought more laws restricting the 2nd Amendment rights of law-abiding citizens, while simultaneously continuing to undermine our institutions of law and order. And to suppress the truth, some now seek to prohibit firearm manufacturers and supporters of the 2nd Amendment from advertising products in a manner designed to remind law-abiding citizens that they have a Constitutional right to bear arms in defense of themselves and their families.

We will continue to work alongside law enforcement, community leaders and lawmakers who are genuinely interested in creating safe neighborhoods. We will engage those who genuinely seek productive discussions, not a means of scoring political points. We will continue informing law-abiding citizens that they have a Constitutionally-protected right to defend themselves and their families. We will never back down in our defense of the 2nd Amendment.

On its face, Mark Smith's statement, which has been shared all over social media, is factual, and unambiguous. In reading lots of readers' comments on the post, it's clear many liked the bold statement. Many law-abiding gun owners feel like they are under constant attack from politicians and the media, and Mark Smith's statement captured that sentiment.

But not everyone is on board with Mark Smith's statement. Of course, the anti-gunners will contend with his words, but there are a couple of other gripes even pro-gun people have with Smith & Wesson's public statement..

For some gun owners, what the company did back in 2000 makes them untrusting of any pro Second Amendment statement coming from the company, and it has to do with something called “the Hillary Hole.”

Heere is the brief synopsis of a decision S&W made in 2000 that nearly bankrupted the gun manufacturing giant.

Back in 2000, when slick Willie was president, Smith & Wesson made a deal with the devil to stay in business. The devil, being the Clinton administration/Federal Government. Unsurprisingly, the Clinton Administration pushed gun control. Just like today, the call was for manufacturers to build guns with pointless internal “safety features” and restrictions on magazine capacity. Well, even though congress didn't pass the laws, S&W voluntarily agreed to the Clinton/Bloomberg crafted gun restrictions. They began manufacturing revolvers with a ridiculous key lock built into the frame. Someone called it the ‘Hillary Hole' and the name stuck. 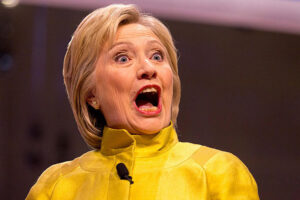 En masse, gun owners walked away from S&W, as the NRA and other groups openly called for gun owners to boycott the company for its capitulation. The pressure worked and the company nearly went under.

That was over 20 years ago, and S&W has a restored reputation in the gun community. Not only that, but any members of the team that had a part in that disastrous agreement are no longer with the company. So on one hand, yes S&W messed up, because they lacked the fortitude to stand up to anti Second Amendment political pressure. They thought they could earn favor with the enemy and continue selling guns, while other companies who didn't comply would fail. On the other hand, that decision was made over 20 years ago, and the people who made it aren't even employed by Smith and Wesson anymore. So, maybe it's time to move past the Hillary Hole debacle. 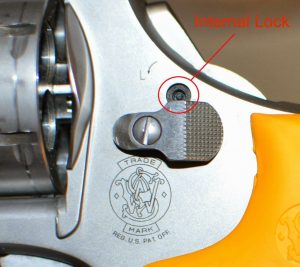 The other complaint is that the statement doesn't call out the blatant misuse of the DOJ and ATF against gun owners and the Second Amendment. The ATF is acting as a quasi-legislative body by changing definitions in order to restrict gun ownership and criminalize law-abiding gun owners. The ATF is doing this because federal gun control legislation is not as popular as the media and politicians want us to think. At the state level, we actually see more gun legislation favorable to gun owners.

So the beef some have with Mark Smith's statement is that it just doesn't go far enough. I think that is a fair critique, however not talking about abolishing the ATF it doesn't negate the rest of his words. My opinion is that the ATF is overstepping it's authority and like any other governmental agency, is far too large and powerful. That is a conversation for another time, and perhaps that is why Mark Smith didn't address it.

Or maybe he fully supports the ATF as some speculate.

In his statement, Mark Smith says:

We will continue to work alongside law enforcement…

Some see this as openly supporting all law-enforcement, even those federal officers who dutifully put conscience aside and carry out what many believe to be unconstitutional laws. Some comments asked if the company will continue to work with LEOs who wilfully violate the people's Second Amendment rights. They also believe the statement is disingenuous because S&W would not want to lose their lucrative military and law enforcement contracts.

I don't think anyone could reasonably argue that all law enforcement is unnecessary or corrupt. I don't see S&W's statement of support for law enforcement as a negative thing. If Mark Smith had included a qualifier like “We will continue to work alongside all law enforcement who uphold and recognize the constitution” would people still object? You know they would. So it probably couldn't have hurt, but the skepticism would still be there for some.

What do You Think —

The political temperature will continue to increase as we get closer to mid-term elections and I don't see it slowing down. Who knows how crazy and polarized the country will be for the next couple of years leading to the presidential election? What do you think about S&W's statement? Are you more likely to support the company or is their strong 2A stance just for show? Do you think that more companies will be forced to make public declarations on where they stand in their support for the Second Amendment? Should we even expect companies to make statements like this? I'm curious to hear your opinions, so leave us a comment.

Also consider subscribing to our Concealed Carry Podcast where we discuss a wide range of topics related to gun ownership and concealed carry. You can also take part in the podcast on Facebook or YouTube on Wednesdays when we record new episodes. 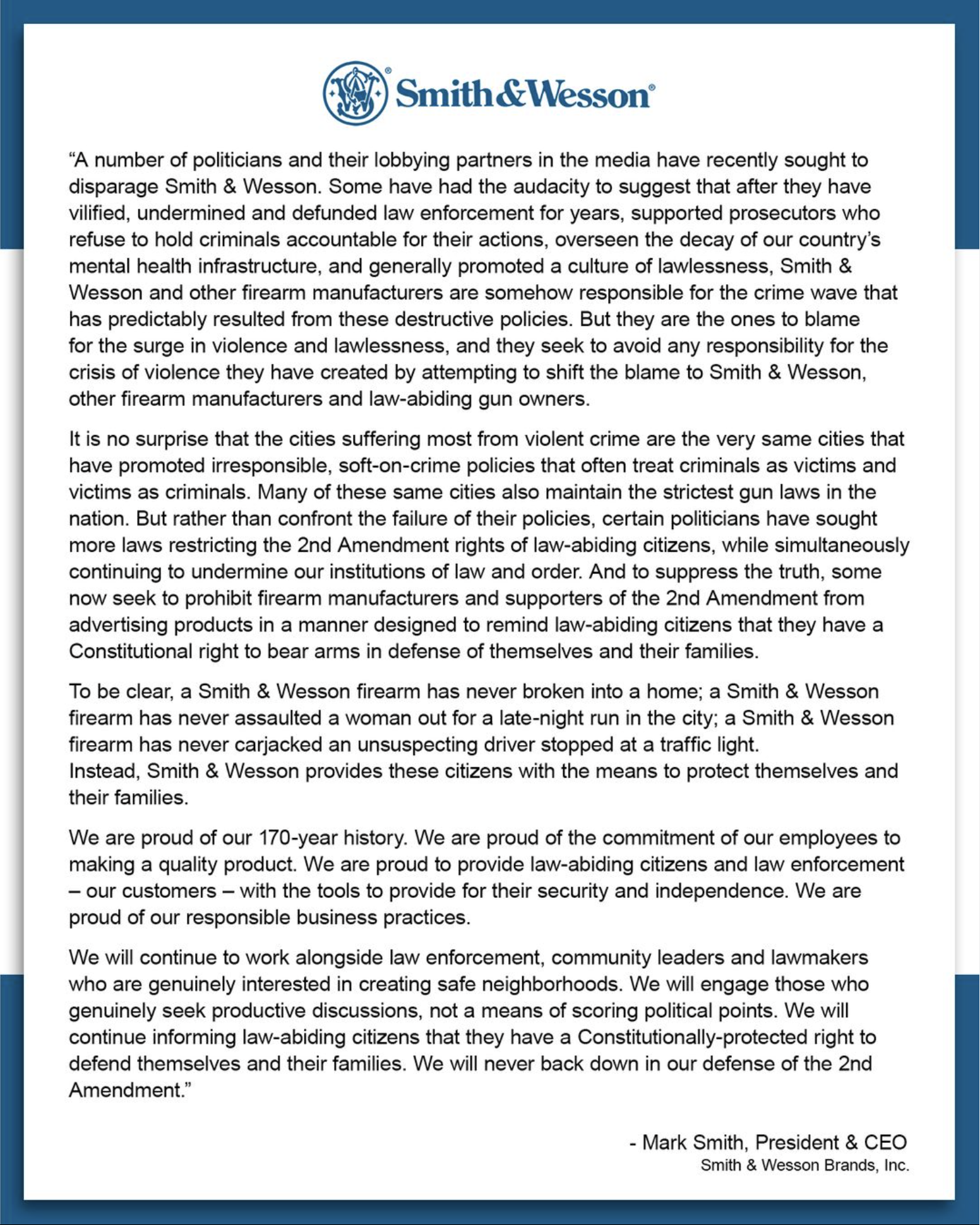 Posted in News and tagged 2A, smith and wesson