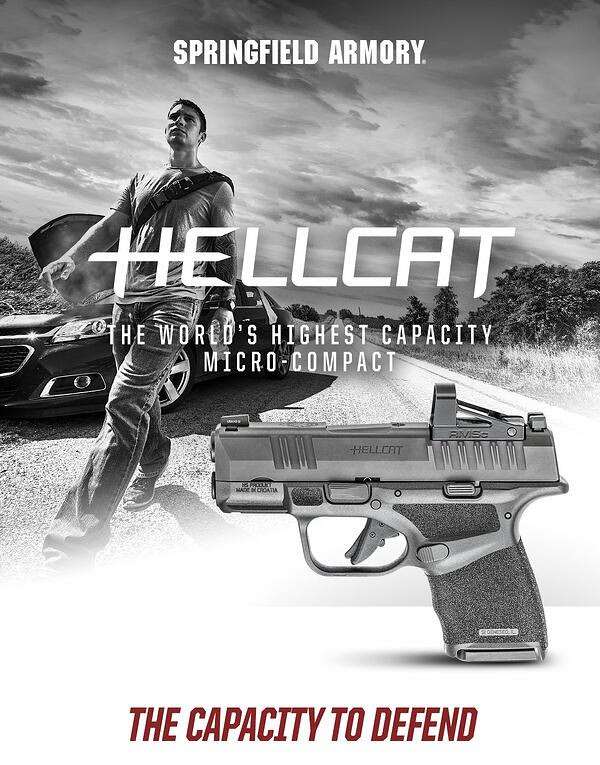 For a few weeks now, Springfield Armory has been teasing us with another one of their marketing campaigns, promising us something big–which actually turned out to be quite small, size wise. What they brought us in the form of their press release just this morning, is their new micro compact Hellcat.

The Hellcat is being touted as the highest capacity micro compact currently available on the market.

It comes with two 9mm magazines, one 11-round mag, and one 13-round magazine. It boasts an extended beaver tail, and a rear U notch sight along with a tritium front sight.

The Hellcat series also has as an optics-ready model, milled and ready to accept a red dot that's made for smaller pistols, and, get this, you can leave your rear sight in place (something the XL lacks). 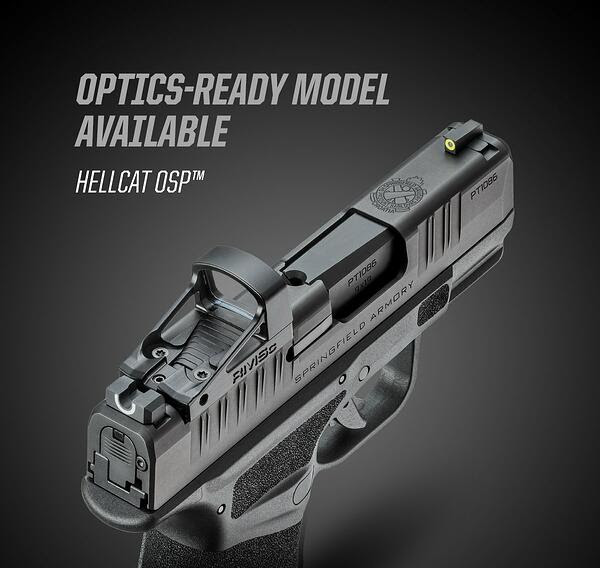 Its dimensions are as follows: 1″ wide, 4″ tall, and 6″ long. It reportedly has a standoff feature that allows you to engage an attacker, with muzzle on body that won't prevent the pistol from returning to battery for follow up shots, with a flatter-looking trigger than you'd usually see on a polymer Springfield pistol.

Sounds like a good little gun and I'm sure we'll be able to get our hands on one to test out at some point.

I'm not gonna lie, while I know for a fact this pistol is meant to compete with SIG's P365 and their newer XL pistol, it sure seems like they're going right after SIG with some of the things they're saying.

They say things like you shouldn't have to sacrifice reliability for capacity which refers back to the original 365 release and the issues they had going back into battery, primer dragging, and a few other issues that have all, for the most part, been worked out.

They also say things like the Hellcat comes with a “non-proprietary” accessory rail–which is something else SIG gets dinged on from some people.

And, while they didn't directly mention it, there's also the issue of the optic plate on the XL. The XL's optic plate must come off to put the red dot on. It seems as though Springfield addressed that, as well.

Over all, this looks like a home run from the Illinois based gun maker. We'll let you know how it shoots as soon as we get to try one out. You can find more info out on Springfield's website.

This news, along with our “save the date” info for SHOT Show's Range Day also coming to us today, I must say that I can't wait for SHOT. It's already looking like it'll be a great year for gun releases. Stay tuned as we enter the time of year when guns are released.