Join Our Newsletter
Shop Our Store
MAIN MENUMAIN MENU
By Joshua Gillem on February 11, 2020 in News 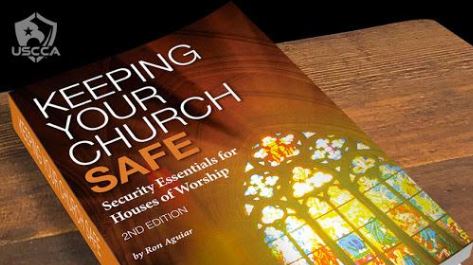 There is an ever growing fear among many church goers that their church may be targeted by an attacker just because their beliefs are different. This fear has forced many places of worship to think outside the box about security, as well as how to handle potential threats.

I personally carry a concealed gun to my church and am willing to use it to defend life if necessary. And, before we ended up moving out of PA, I met with our old pastor in an effort to try and form some sort of church security team. I was sadly denied, but hopefully they have taken action to protect their congregants by now.

How does a church get the knowledge needed in order to protect themselves?

There have been many words written about church security, videos recorded, and courses formed around the topic of keeping people safe while at church and with good reason. There does seem to be an uptick in the number of attacks taking place in houses of worship.

And, as with all things concealed carry, it's better to be trained and not need that training, than it is to need the training, and not have it. And, a team of people who share one goal, like we saw in White Settlement, TX is much better than a lone concealed carrier attempting to neutralize a threat by himself.

There may be local organizations or trainers in your area who specialize in church security and training. And if not, there are other things you can do to help keep your church safe. For example, the USCCA put together a book designed for just this topic.

The book is called “Keeping Your Church Safe: Security Essentials for Houses of Worship.”

In addition to the book, the USCCA is helping in other ways, as well. For example, they recently raised over $28,000 to support the faith communities who were attacked in both Texas and New York. During the month of January, 2020, they ran a donation to support the communities.

This $28,000 will reportedly be divided equally between the two faith communities. Half of those proceeds will go to the Church of Christ in Texas, and the other half will go to the Jewish community in New York.

USCCA President Tim Schmidt said this in the press release we were sent:

We’re incredibly thankful for the outpouring of support and generosity from the USCCA community … After these tragedies, we were all determined to do something to both help these communities and demonstrate our gratitude for those willing to defend them. We’re here to save lives by empowering America’s responsible protectors. So that’s exactly what we set out to do. On top of this donation, we were able to provide lifesaving education and training to people across the country.

Getting trained for an attack at church is the responsible thing to do, and a good place to start is with that book from the USCCA.

Does your church have a security team? Let us know in the comments, below.