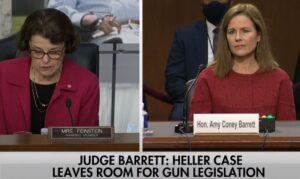 As I sit and watch Feinstein question Judge Amy Coney Barrett about different “issues” our country faces, the topic of guns has finally come up, and I just happened to be watching it live, as it did.

I'm honestly not sure how I feel about it because I tend to be of the frame of mind that says, “shall not be infringed” means exactly that. In other words, take your gun control and shove it.

Anyway, I've done my best to transcribe part of this interview because there weren't any videos as of the time I wrote this, but I'm not a transcriptionist and may have made a couple of mistakes.

Feinstein said in the interview:

This country is facing great gun violence. There has been a surge in gun sales during the Covid 19 crisis which has led to more lives being needlessly lost. According to the Gun Violence Archive, an independent research organization, there were 60 mass shootings in May alone. These shootings killed 40 people, they hurt 250 more.

Also there has been a troubling spike in gun sales. Americans bought approximately 2 million guns this past March. It's the second highest month ever for gun sales. That figure does not take into account all the gun sales that could not be completed because the purchaser could not pass a background check. A number that has also skyrocketed.

For example, this past March the FBI's background check system blocked 23,692 sales, more than double the number in March of 2019.

Do you agree that federal, state, and local governments have a compelling interest in preventing a rise in gun violence, particularly during a pandemic.

Well senator, of course the constitutionality of any particular measure that was passed by any local or state governments or by this body would be subject to the same judicial process that I described with senator Graham.

What I will say, because this is just descriptive of Heller, Heller leaves room for gun regulations. And that's why there has been a lot of litigation in the lower courts, which makes me constrained not to comment on the limits of it. But Heller does not make a right absolute, which says so the opinion.

She also went on to say that the original meaning of the Second Amendment supports the idea that government can keep guns from dangerous people, like the mentally ill.

Now regarding the FBI's denials Feinstein listed, above:

I'm not sure if Feinstein knows it or not, but she basically said that the current measures put in place to make sure that bad people don't get guns, i.e. background checks, are working.

More than double the amount of people were blocked from purchasing a firearm from the same month last year. If that says anything to me, it's that background checks work to at least some degree. And, taking it a step further, if we were to fix the part of the background check system that was broken at the state level in various states where it has been found to be broken, it would work even better.

Here is a quote from a different article I wrote concerning this very thing:

It's a problem that is never spoken about, and rarely reported on, but in addition to criminals acquiring guns illegally, is a massive issue. In just one state, North Carolina, 145,000 crimes were not reported to the background check system over the past few decades.

Imagine law abiding gun owners having to pay with their gun rights because the state of NC failed to report 145,000 crimes to the background check system.

That's just one state, my friends, and I'm pretty certain it happens all over the place. You can read the rest of that article, here, if you're interested.

The current system of background checks works, but is flawed. They know this but won't admit to it. Why? Because it has never been about keeping people safe, it's about controlling the people.

Time will tell how this plays out. I'm not sure what my opinion is just yet, but I do believe that Judge Barrett is a better fit for the position than most others are. I just hope that when she says Heller leaves room for further legislation, that she means something positive for us and the Second Amendment, and not something negative that may further restrict our inalienable rights.

Episode 449: The One Thing That’s Made All the Difference in my Shooting
Tyrant Designs’ Latest Glock Aftermarket Upgrades Are Impressive as Always