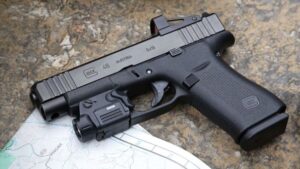 Furthering our suspicion that utilizing a red dot on your carry gun is a thing of the future and here to stay, Glock has announced the addition of the MOS lineup of their slimline guns.

Both the G43X and G48 have received an update with an optic cutout allowing the user to install a micro red dot, like the Shield RMSc, or similar.

Introduced relatively recently, these slimline guns boast Glock reliability and ergonomics in a thinner platform, still giving the user 10 rounds in the magazine. And, I think we all knew it was just a matter of time before they were turned into MOS guns.

One of the biggest pet peeves of mine is when a gun manufacturer builds their slide in such a way where the stock sights cannot be utilized, or at least be used without modification (like installing taller sights), if the dot malfunctions when you need it most.

The press release we were sent has said that the stock sights will still have full functionality if your red dot stops working.

By the way, as a side note, I believe this is something that should be practiced while at the range.

The way I'd do it, is remove the battery from the dot and then conduct some shooting drills looking at the sights through the glass because it is a little different than what you may be used to, and having the assurance that you can shoot this way is majorly beneficial.

The addition of the optics capability isn't the only update to the 43X and G48, however. The pistols have also been the recipients of a snazzy new accessory rail called the GLOCK mounting rail system. (per the press release)

The wording in the press release is something that concerns me a bit, when they say “non-standard accessory rail” my mind automatically drifts to proprietary lights and being forced to use less-than-good equipment.

I could be wrong here, though, so don't take this as fact. Actually, here is the sentence from the press release concerning the rail:

A non-standard accessory rail allows for a light to be attached with close alignment to the firearm’s bore with positioning in front of the trigger guard which allows the operator to maintain a two-handed grip.

Again, I could be wrong about their end goals with the rail, but if it's what SIG did with their 365 forcing people to use their lights I'm not going to be thrilled.

This is just an announcement as of right now, and these pistols aren't actually listed anywhere just yet. Stay tuned as we strive to bring you the latest in news.

Stay up to date by subscribing to our newsletter, here.

And, who knows what SHOT Show will bring this year, as we all still plan to go unless they cancel it.

P.S. ~ For those of you who will say that using a red dot is stupid or that it'll break or whatever your argument is these days, please know that the major gun manufacturers aren't going to make pistols like this designed for carrying if it was going to go away.

This is here to stay, and having the ability to use your “backup sights” to defend yourself shows that they're moving in the right direction.

Read this next: My time so far with a red dot.