Join Our Newsletter
Shop Our Store
MAIN MENUMAIN MENU
By Joshua Gillem on November 30, 2017 in News 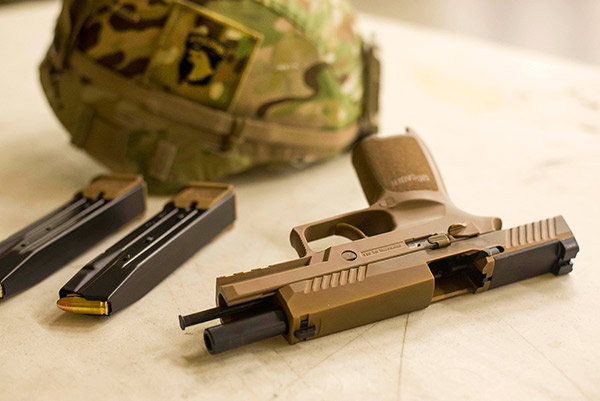 Gun maker, SIG Sauer, has had a roller coaster year with some ups and a few downs as well. Some recent news, is that their MHS (Modular Handgun System) is starting to get shipped off to different military units, giving some more, positive, news. In fact, a press release just went out letting the world know that the first Army unit has begun to field the M17, which is a variant of the P320. The unit in question? The 101st Airborne.

Choosing such a historic and decorated unit that has been in service on and off since 1918 was not happenstance, but a decision likely meant to drive home the fact that America will continue to have a combat ready force with top of the line equipment that outperforms anything our enemies have.

The M17 modular handgun is different in that it uses a pistol chassis as the part that is actually considered “the gun” and can be placed inside different sized frames, with different grips, or different calibers. Also updated from the M9, is the rail mount, the ability to mount a red dot on top, the trigger is lighter, and that it's striker-fired–not hammer.

Still, many folks are wondering if this was a good step for the Army, after all, the M9 has proven itself to be a worthy sidearm for the past 30+ years. Time will tell at this point, but what I want to know, is which gun you would have chosen if you were in charge of the Army and had to make the decision. Would you have chosen the SIG or stayed with Beretta? Or, maybe you're one of those who believe Glock Pistols are the end-all self-defense and service pistol tool.

I personally would have chosen the FN 509 or stayed with the Beretta, just updated to the A3. Personally speaking, the M9 I was issued in my beloved Marine Corps was tired, heavily worn, and in need of a replacement. Then again, the Marines usually do end up with the other branch's leftovers–doing more with less.

Anyway, let me know which pistol you'd have chosen in the comments below.