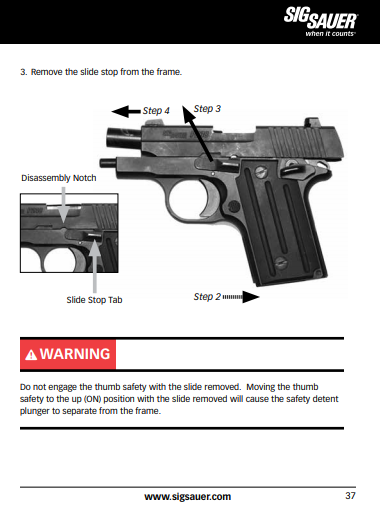 Here's a Sig Sauer Manual for the 938 pistol. Notice the warning there, which you may or may not have done if you hadn't first read the manual.

I'm a dude. And, I admit, I'm one of those guys who'd rather put together a piece of furniture or something without reading the owner's manual for that thing, whatever it may be, that I'm doing at the moment.

In fact, I just moved and have been in the need of acquiring new furniture that had to be assembled. Two nights ago I had to disassemble that dastardly thing I was putting together for my wife because I put something in backwards. I hate reading things, even though I'd save myself a lot of heartache if I just read it beforehand.

Which, depending on how you look at life, is strange because I'm the editor here at concealedcarry.com–where I HAVE to read things on a daily basis. One thing I always try to read, however, is the owner's manual for each new gun that comes into my life.

Why? Because this is life and death stuff, people.

Why you should read your owner's manual:

Your owner's manual is going to tell you key things about your gun that you need to know. For real. It'll tell you which type of ammo your gun likes. Did you know that if you use the wrong ammo in your gun it could void the warranty? While I've never heard of it being done in the past, they warn you … so it could happen.

I've read one once from Coonan Inc. that told me to break the gun in for 500 rounds before I say there are any issues with it. Coonan, by the way, makes 1911s chambered in .357 Magnum and are some of the most fun you can have at the range.

And sure enough, there were several stovepipes (where the empty case doesn't eject all the way and gets stuck in the closing slide) up until the 500 round point. After that, it was smooth sailing. Why? Because they built that handgun and know exactly what it needs to function properly.

What else is covered?

Your owner's manual is also going to tell you how to break down and clean your gun. If you've never done that specific gun before, you should know exactly how to break it down. It is possible that you damage your gun if you don't do it properly. Here's an example:

I have a Sig Sauer P938. That gun lays out very specific instructions on how to break down and clean the pistol. It says that if you were to activate the safety on the frame while the gun is disassembled the detent could fall out, needing a gunsmith to put it back together again. Above is a picture I saved from Sig's website showing what it says.

Or, let's say that your newly acquired handgun comes with a red fiber optic front sight installed, but it also came with a greenish/yellow one that you want to try out. Well, they've likely got you covered there, as well. My XD Mod.2 Sub Compact told me how to change it out if I wanted to. I just happened to like the red and left it alone.

Here's another one. Let's say your gun has more than one passive safety to prevent unintended discharge. Let's use the XD again. So, there's a passive trigger safety and a grip safety. If you hadn't read your owner's manual, you may not have realized it, which could be dangerous.

Also, as a side note, XD pistols are a victim of the limp wrist more than many other guns are. While you need to always have a firm grip on any gun, on an XD your gun will not operate. I've purposefully limp wristed an XD and caused malfunctions. As with just about anything, proper training is all that's needed.

You'll also see an exploded parts list in case you find yourself with a broken or disassembled gun that you're struggling with putting back together, magazine disassembly instructions, and warranty information.

What if you don't have the manual?

Furthermore, if you ever find yourself buying a gun that doesn't come with an owner's manual, you can find them online. Just go to the manufacturers website and search for your make and model. If you're struggling, a broader search on your favorite search engine should yield some results. Finally, if you still struggle, call them up. They will point you in the right direction.

They want you to be safe so they can't be held liable if you do something stupid with your firearm. They'll get you to an owner's manual if you request one.

What other reasons do you have for reading your gun's manual? List them out in the comments below.

4 Responses to Why You Should Read Your Owner’s Manual