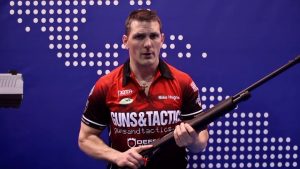 Recently, as a special treat for our Guardian Nation members, USA Firearm Training had a sit-down interview and audience Q&A with Mike Hughes, or as he is affectionately referred to, Big Mike.

Mike was a contestant on the History Channel's Top Shot Season Three where he was a member of the Blue Team, but after making it to the final seven on his season, he joined the Green Team. Mike was originally eliminated during Week Nine, after losing an elimination challenge against Gary Quesenberry. However, after the resignation of Jake Zweig in the following episode, he was brought back to the competition where he eventually reached the Season 3 Finale eventually losing out to Dustin Ellermann.

Before that, Mike played college football at the University of Idaho and practiced law for over a decade.

He is also the founder and president of Next Level Training in Ferndale, Washington. a United States Practical Shooting Association competitive pistol shooter where he placed 7th at their Nationals competition, and the inventor of his own training pistol called the SIRT Pistol.

Mike is known for his absolute obsession with speed and accuracy born out of a love for fundamentals. He focuses on teaching the most important and critical aspects of handgun shooting. This is what led him to develop the SIRT which has become a top training tool at all levels of military, law enforcement, and private training organizations.

USA Firearm Training President Jacob Paulsen and Riley Bowman sat down with Mike to discuss his mindset for competitive and defensive shooting. Some of the discussed topics included…

In order to view the recording of this special broadcast please click here and if you'd like to participate in our next webinar, be sure to sign up for our monthly Guardian Nation subscription.

To become a member of Guardian Nation, simply click the button below and follow it to our sign-up area, to take advantage of the immense benefits of membership. Including full access to interviews with folks like Mike, 10% off all purchases at USA Firearm Training, skills and drills every month, and a quarterly subscription box, The Guardian Box.