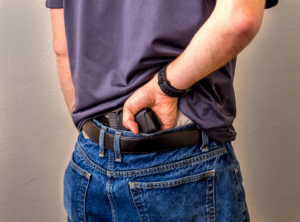 Antonio Cowherd and Mikel Kendrick, both 19-years-old, along with three minors were arrested on robbery charges after three of the suspects held up a Burger King at around 9 p.m. Wednesday night. The teenagers walked into the restaurant with guns, but a firearms instructor who had just left the restaurant with his food saw the suspects putting on masks and going inside, so he followed them.

That customer, who has not been named, but licensed to carry concealed, ordered the teens to drop their weapons. However, the robbers instead turned and pointed their guns in his direction. That man fired to defend himself and a gunfight ensued.

No one was hurt in the shooting and the suspects fled in an SUV. Luckily, officers were familiar with the description of the suspects and their vehicle because this same vehicle matched previous robberies in recent nights. About 40 minutes after the shootout, an Indiana officer stopped an SUV that he knew matched the description of one wanted in the series of robberies in Marion and Hendricks counties. The three Burger King suspects and two others were inside the SUV, all believed to be related to nine robberies in the last three days.An IMPD spokesperson said she is thankful no one was injured in the shooting and stressed the importance of education and training for gun owners.

An IMPD spokesperson said she is thankful no one was injured in the shooting and stressed the importance of education and training for gun owners.

“I do appreciate the fact we have individuals that exercise their rights to carry weapons, that they have the training to go behind it, to understand when they can use deadly force,” said IMPD Deputy Chief Valerie Cunningham. “That's so very important for people to understand how precious life is and that you can't just fire a handgun over a material issue. You actually have to fear that your life is being threatened or someone else's life is being threatened.

“So it's so very important, you know, the combination to have an individual that was armed and had the knowledge and the training to understand when they can use that weapon, you know, that definitely played a large part in this.”

The customer remained at the restaurant and was speaking with police late Wednesday. No charges are planned to be filed for the concealed carrier.

Episode 60: What This Election Means For Guns
Why You Should Already Be Prepared For the Next Riot