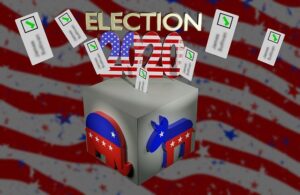 The election was a mess. At no point in recent history do I remember a time with so much drama surrounding the election process along with violent threats, and so much confusion.

There were (and are still) reports of fraud, covering up polling stations so workers couldn't be seen counting polls, and a few surprises in the election. To say the least amount possible, it has been interesting. And while a winner has been chosen by the media, President Trump has yet to concede and holds the position that he can still win.

None of that is the target of this article. Instead, this article discusses the Second Amendment and our gun rights under a Joe Biden or Kamala Harris Presidency.

And in fact, things aren't looking good for us freedom lovers. If Joe has actually won the office and gets his wish, he'd be giddy to take away any of our guns that he deems to be dangerous. What guns are dangerous? Well, the fun ones. And by fun I mean necessary to the preservation of freedom.

On his website he wants to get “weapons of war” off the street, ban the manufacture and sale of “assault weapons” and “high capacity magazines,” and put “assault weapons” under the NFA. I go more into detail in this article, here.

Hmm, by weapons of war I guess that means I'll have to get rid of my WWII era 1903a3 Springfield? That is a weapon of war by definition. It's a real weapon of war that was used to kill nazis back in the day.

It's a bolt action rifle, by the way.

To my knowledge, most modern-day semi-automatic rifles and handguns have NO war history. That was a distinct designation given to the AR's sisters: The M16 and M4, as well as Colt 1911s and Beretta M9s. But hey, what do I know … I was only in the Marines for four years using and qualifying with these guns.

(My point with that statement in case you misunderstand is that any soldier, sailor, airman, or Marine who tells you an M16 and an AR-15 are the same thing is either lying to you, is very confused, or guilty of stolen valor.)

Of course all of this hinges on if he has friends in the other branches of government. The House of Representatives is already filled with Biden‘s friends and he'll have no problem getting his way over there. But the Senate is currently a different story.

As of right now he should hopefully have at least enough opposition in the Senate to keep any anti-gun legislation at bay, but any of that can change, and these people are itching to take away guns. They are saying it. And if they have the numbers to do it, which could happen in January at the Georgia runoff election, or in 2022, we will find ourselves up that creek.

And, this is really important stuff. It is imperative that we keep our guns.

Because, while Joe Biden speaks of unity and bringing both sides together, his colleagues in the Senate are demanding to put Trump supporters on a list to hold them accountable. I'm not entirely sure what that means, but to me it's a battle cry.

I'm not 100% positive on this one, but I'm pretty sure putting people on a list, or archiving them, is usually about the time mass murder starts to happen. I'm not a historian, but I feel like I remember the Jews being “archived” before Hitler started to wipe them out.

I also feel like I remember these people being disarmed at some point so they couldn't fight back. My friends, what I'm about to tell you comes from me, and me alone. I cannot make a statement like I'm about to from the company.

This is therefore only my opinion:

Don't give up your guns. Ever.

If we give up our guns and are put on a list like AOC wants to do we have no way of protecting ourselves. Will it come to that? I hope not, but the “archiving” of Trump supporters is exactly how it would start.

Without an effective list how else would you know who is your enemy? That's what this is. She considers 70 million people her enemy and I fee like at least one of us should tell her that most of those 70 million people are gun owners.

I also want to inform her and Biden, if they'll listen, that nearly 3/4 of all veterans are pissed off conservatives.

We are taking this threat of hers very seriously.

It's not just her threat, however. Her thought process is more widespread than just her. She just happens to be the one saying it out loud because she's a socialist and doesn't really care.

Many of her supporters believe the same thing as can be seen in the comments section of that Tweet, and even other elected officials and members of the media have uttered similar nonsense.

While I don't know exactly what this looks like going forward or how they'll archive us, I know two things with absolute certainty:

First, this isn't going to end how they want it to. Second, it won't end well.

Where do you stand on this whole thing? Will you be giving up your guns when Sir Sniffs A Lot tells you to turn them in? Let me know in the comments, below.

5 Responses to What The Election Results Mean For Gun Rights