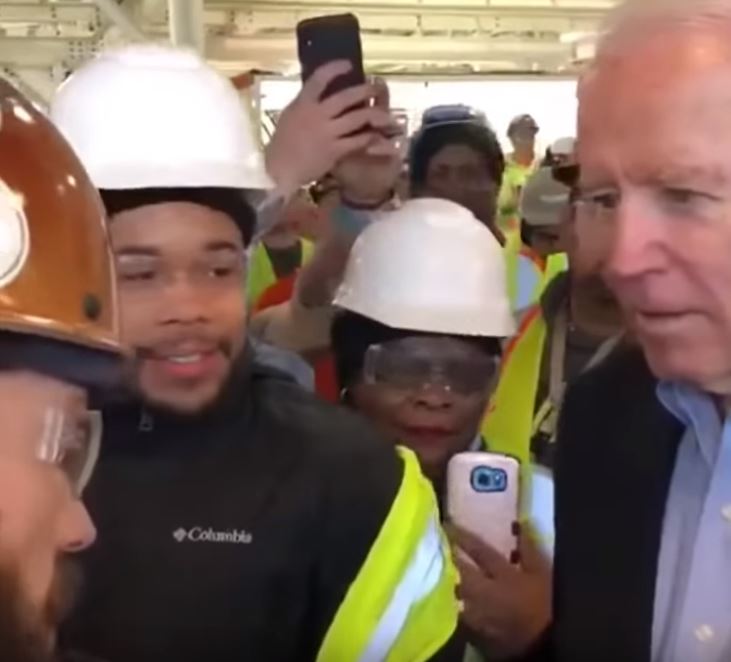 Going viral yesterday was a video of presidential hopeful Joe Biden touring an auto manufacturing plant in Detroit. His walking around isn't what made the video viral — it was his heated exchange of words with a worker who had confronted him about his stance on the Second Amendment.

The worker was a man with a hard hat who accused Biden of “actively trying to end our Second Amendment right.” Biden told the man that he was “full of”, ya know, crap and told the man to stop being such a horse's rear end. (Please note, he did not use such polite language. I changed out the swear words to keep our blog family friendly.)

How presidential of him.

Biden also went on insisting that he didn't say he'd take away people's guns and that it was “simply a lie.” He also went on to say that he supports the Second Amendment, owns several different kinds of shotguns, and has sons who hunt.

Ya know, because the Second Amendment only applies to hunting … Here's the first video with a good portion of this conversation. Please note the second video has the fact checking, as well as a different point of view of Biden and the man arguing:

The best part about this, is that you could really tell he was struggling. I got the sinking suspicion that he wanted to say something else, as he started to go down a wormhole, saying things like, “do you need 100 rounds?”

As if to say, nobody needs that much ammo. He consistently shushed an assistant who was with him, and is clearly not in the right frame of mind. One second he says “I'm not taking your guns away at all,” and the next he says, “you're not allowed to own any weapons,” finally followed by, “that's right! … AR-15s are illegal!”

Biden is either lying himself, is really confused, or just an idiot because he was on record saying that he was going to put Beto in charge of taking away people's guns if elected president.

Then again, on any given day he either doesn't know which election he's running for or is endorsing our current president.

I think the funniest part of the whole interaction, however, is when Biden essentially told this man to meet him outside so they could settle this. As if a 77 year old potential dementia patient who never worked a day in his life outside of politics could keep up with a guy who works in an automotive factory.

The election season is starting to heat up, and while we're not technically a political blog, when it comes to guns we do get into it more than we'd like.

If they'd just leave us and the freedom of the American people alone, we wouldn't have to cover politics. Not only is there no sign of the anti-gun rhetoric slowing down, it seems to be getting worse.

Make sure you sign up for our newsletter so you don't miss a beat on this stuff.

States Blocking “Self-Defense Insurance” And What To Do About It
How Do I Use a Handheld Flashlight and Handgun at The Same Time?