For our more in-depth article on this topic, click here: Why Magazine Capacity Restrictions Don't Work.

States shown in RED have existing bans on magazine capacities. Hawaii's ban is on handguns only. Virginia doesn't have a ban; however, they only allow residents to purchase firearms that have a capacity of more than 20 rounds. Also, while Illinois doesn't have a state-wide ban, one county and several cities have local bans. 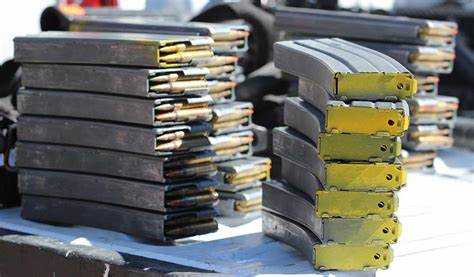 After the Newtown Conn shooting, in speaking of the need for magazine capacity limitation laws, then Senator Biden said, “Maybe if it took longer, maybe one more kid would be alive.”

There is a vocal group of people out there who call for capacity limitations because they feel us normal people (non-criminals) don't have any need for “high capacity” magazines. Perhaps they feel that of all the Draconian gun legislation they would like to pass, this is one is the easiest to enact.

Gun control is nothing new. Throughout world history, measures restricting the individual ownership of firearms proceeds restrictions of other individual rights, liberties.

As far as magazine limit restrictions specifically, In 1994 President Clinton signed the Federal Assault Weapons Ban of 1994. The federal law went away after a failure to renew it in 2004. The legislation had a clause that prohibited the manufacturer and/or transfer of “ammunition feeding devices” with a capacity of over 10 rounds.

Contrary to what you may hear on Twitter, the Federal Assault Weapons Ban wasn't repealed by Pres Bush, or the NRA. The legislation was to be enacted for a period, and at the end of that time, an independent study was to be done to assess its effectiveness. The study, and others since, found the legislation had no recognizable impact on crime, and thus was unnecessary.

This sounds fairly easy to believe on the surface. If we limit magazines to only ten rounds (or any other low arbitrary number) then when the criminal hits that capacity, he will have to stop what he is doing and take a few seconds to reload. This is the moment where good guys pounce and stop further deaths. The problems with this argument are many.

Law-abiding individuals have no need for a magazine that can hold more than [fill in the blank] rounds.

Another argument that on the surface, may to some make sense. When I'm out in the woods shooting at deer to feed my family, I don't need a 30-something round magazine, right? Here are the holes in this common argument:

To pull the card out of the deck once more, let me remind people that laws only affect law-abiding people. Criminals ignore magazine capacity limitations wherever possible. Even if limiting access to “high capacity” magazine made it difficult for criminals to get them, we have to assume that all magazines would also be taken from existing owners. Wild proposals like that have been scrapped in favor of “grandfathering” in currently owned magazines, because proposals like these are entirely un-enforceable.

As mentioned above, as lawful gun owners, we cannot support any legislation that would cripple our own ability to defend ourselves and our families, and it is clear that reducing the number of rounds we can carry would limit our ability to do so.

While criminals who premeditate crime have an easy time remembering to bring multiple magazines and firearms to the scene, the good guys who respond in self-defense almost never have more ammunition than what is already in the gun.

No matter the arbitrary number, 5, 7, 10, or 15, none of these proposals are viable nor would they limit lethality. After all, what is the correct number to limit the capacity of a magazine to? Because no data exists to show a correlation between the number of rounds in a magazine and lethality, any proposed number is completely arbitrary. Unless we are to say that 11 rounds is exceptionally dangerous, but 10 rounds is not. On its face, this argument is absurd.

If we start with any magazine limitation at all… where will that lead us? Once a law has been passed, it becomes all too easy to change the number or add to the limitations. It becomes a slippery slope. Killings will continue with 10 round magazine limit restrictions in place. So the next step is to limit it to 5. When that doesn't work, the next step is to remove guns from law abiding citizens.

The grandfather clause is an illusion. The majority of proposed laws allow that if you already own said high capacity magazines, you can continue to own them and use them. This is the means to an end. Since the grandfather clause doesn't allow the owner to transfer ownership to another and doesn't allow companies to manufacture or import new magazines, the goal is complete elimination over time.

Again, I want to say, the legislation didn't work last time. All the research said the law had essentially no effect.

The Brady Center to Prevent Gun Violence did find in their research that the percent of firearm related deaths involving the firearms ban decreased. To this I say… duh, of course they decreased if the guns weren't available. But did the total number of gun-related deaths decrease? No. So criminals still killed people with guns, regardless.

States shown in RED have existing bans on magazine capacities. Hawaii's ban is on handguns only and while Virginia doesn't have a ban, they do only allow residents to purchase firearms that have a capacity of over 20 rounds. Also, while the state of Illinois doesn't have a statewide ban, one county and several cities have local bans.