Join Our Newsletter
Shop Our Store
MAIN MENUMAIN MENU
By Joshua Gillem on July 16, 2018 in Opinion 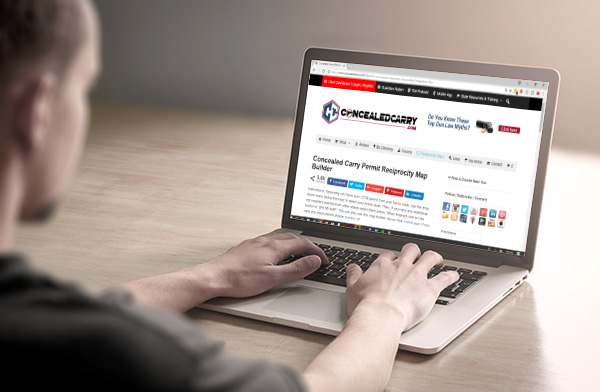 We've had quite the exiting year, so far. We are just over halfway through 2018 and I figured it may be a good idea to show you some of our most popular resources and articles from January-June, 2018. By all means, if you haven't yet seen these articles or resources yet, check them out because they may be very handy for you. Here are our most popular web pages based on visitors, alone, from January-June:

This one is a no brainer for me because it's such a useful tool. No joke, it's the best one out there and I'm not just saying that because I work here. You can input your permit info like your resident and non-resident concealed carry permits, and the map will show you which states you can carry your gun in. Check out more on our concealed carry reciprocity map.

We love and cherish our freedoms. The Freedom of Speech. The Freedom of Assembly. The Right To Keep and Bear Arms in defense of oneself and country. America, you are a great home. Of course, there are those detractors and plenty of people who would see us unarmed, weak, and graveling. This article is for them to remind them why we are a Free Country, today, and will remain to be. Here is the founding father gun quotes page.

This is another resource we put a lot of time and effort into making so we could ensure it was as correct as we could make it. As of this writing the chart is correct as of March, 2018, and we update it whenever we find that one of these major self-defense insurance programs makes a change to their coverage. Which companies are on here? USCCA, US Law Shield, NRA Carry Guard, and CCW Safe are the main ones, but there are others. You can find the self-defense insurance company chart here.

In case you've been living under a rock, we sell a holster called the Brave Response Holster. It remains a best-seller for us, and just by reading some of the reviews on this page, you'll see why that is. And, as Forrest Gump would say, that's all I have to say about that.

Keeping a gun on the nightstand —

Jacob put this one together and it remains one of our most-read articles (not to mention one of the most commented on) site wide. In all honesty, I grab a bag of popcorn and snuggle up with my computer late at night just to read the comments because some of them are, well, just go read them.

Want to see a viral article? Well, it's viral for us, anyway with thousands of shares. We put together a list of businesses who prohibit guns so you know where you should/should not spend your hard earned cash if you're like me and decide where to spend your money based on what someone thinks about guns.

Say what? Yeah, you can get your Virginia non resident concealed carry permit by taking an online class Jacob put together. Can you go wrong for a $39.00 class to get a non-resident permit? I don't think so, and I'll be going through that class shortly.

Things that won't stop a bullet —

At some point before I came on board, Jacob put together a list of things that will stop a bullet, and things that will not stop a bullet. Of course there is entertainment value, but more than that, there is something to be learned here as well. For example, if you're in a firefight what can you get behind that will protect you? Check it out here.

In the world of Concealed Carry, there are a lot of things we see people doing wrong. Here are a handfull of the most popular mistakes Jacob sees as an instructor and the president of ConcealedCarry.com.

The Gun in the Glovebox —

Here are some things you need to keep in mind if you keep a gun in your car, or ever consider leaving your gun in your glove box. The problem with keeping your gun in there, is that it's the first place a thief is going to look for valuables.

How many rounds should you carry —

I wrote an article once for a different publication that was similar to this one. Personally speaking, I want as many rounds on my person as I can comfortably carry. Here, Brandon goes much further in depth than that as he discusses how many rounds you should carry.

This topic has been in the news a lot as of late, and it's easy to see why. But, do the two mix? Infantry Marine and former LEO Matthew goes on record here to discuss what he thinks.

I promise that I didn't write this with the intent to upset everyone who loves forty. In all honesty, I take your side, at the end. Find out if 40 is dead, here.

There you have it, my friends. The top 13 articles and resources for the first half of 2018. Which one was your favorite? Let us know in the comments below. AND!!! If you don't already subscribe to our FREE newsletter where we email great info like this directly to you, you can do so, here.

Or, maybe you're into phone apps, well, a lot of the resources we've listed here, like the map, are built into our app for free. All you have to do is download to your smart Android or Apple device. Find out more info on that link.