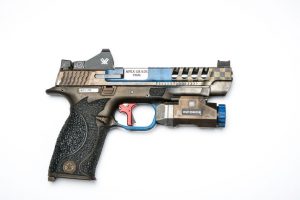 I'm not going to take long to get to the point. You know what's going on out there and that stuff is hard to find. Here are some tips to get you the stuff you need to train properly, as well as a few retailers with some stuff still in stock.

This works really well with ammunition, and you can set up many alerts for different brands.

Don't delay. Things are selling out before my very eyes. What this means, is that it's a good idea to have all of the other stuff in your cart so that when the alert you set says your item is in stock you don't have to waste time putting stuff in there to get to your free shipping mark.

Finally a word about your local mom and pop gun shop, I urge you to go there and make friends with these people. Develop a relationship with them. Who knows, maybe they'll call you first when they get your caliber of ammunition in stock.

PSA can get a lot of heat for their customer service. I've personally never had a problem and cannot comment on it. I will say, however, that they've always got something in stock that I can use, unlike many of the other places out there, which is why I put them first.

A couple of examples, when the lockdowns initially started I ended up buying an AR pistol upper from them at a great price and it arrived quickly. Then, just about a week ago I found that they had bulk 9mm ball ammo in stock and I jumped all over that like a fat kid on a cake.

The best part is that I got the ammo, no joke, just three days later. Now, shipping times for everyone is all messed up right now and it could be that I got it so fast because I live only a few hours away, but I have zero complaints.

They do have some ammunition in stock right now, and while the ammo is rising in price as it gets harder to find, I still live by the thought that it's better to have it and am still buying ammo when I get the chance.

I have strong beliefs that PSA is currently the best place to buy anything gun related, even if you don't like their branded  stuff. Shop their store, here.

Brownells is for everything else. If I don't want to purchase a PSA branded AR-15, or related parts, for whatever reason Brownells is the next best place to look. I will say though that Brownells is struggling to keep up with a lot of their demand right now — as everyone is.

Most ammo is out of stock on Brownells, but not all of it.

Because Brownells does so much business they can usually get stuff back in stock faster than their competition can. Of course, this also means that they sell out faster, though so keep that in mind. Brownells is also better at keeping their prices lower because of who they are and what their name means to the industry.

You can shop Brownells, here.

There are others that are hit or miss. Lucky Gunner for example, has been sold out of just about all popular handgun ammo with the exception of .40, .45, and 10mm. They can get it back in stock quick but it sells out so quickly that it's not even worth me checking anymore.

Did I miss anything? Do you have some place you like to buy your stuff at? If so let us know in the comments below, as well as any tips you might have for finding in-stock stuff.