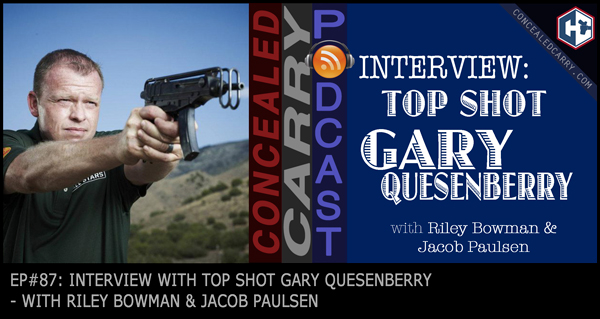 On this episode Riley and Jacob interview Homeland Security Agent and 2-time Top Shot competitor Gary Quesenberry. Trust me, you don't wanna miss this one!!!

Gary Quesenberry is a Triple Nickel coin holder from The Triple Nickel Course of Fire, which is a competition that is designed to measure a shooter’s ability to perform on demand by engaging five targets from five yards in five seconds. Fewer than 70 people in the world can boast that they’ve succeeded in this challenge. Gary is one of those select few.

During Season Three, Gary was originally a member of the Red Team, but after making it to the final seven joined the Green Team. He was eliminated after losing the second Elimination Challenge of the Season 3 Finale.

Gary was then brought back for Season Five but was eliminated during the Season Finale after losing the second Elimination Challenge.

Now a Homeland Security Agent, living in Cleveland Ohio, Gary served his country in the U.S. Army during Operation Desert Storm and was part of the Special Ops Response Team for the Bureau of Prisons.

Gary is an incredibly competitive individual, so competitive in fact that he and his pals often use target shoots to settle disagreements.

Gary is also the founder of Q-Series LLC, a company that manufacturers holsters for speed, safety, and concealed carry. According to Q-Series website, they recognize that carrying concealed is more than a hobby, it’s a lifestyle. Q-Series strives to be the global leader in the manufacturing and distribution of quality concealed carry holsters and equipment.

Today’s episode is brought to you by Guardian Nation. Guardian Nation is THE community for devoted gun people focused on guarding themselves, their families, homes and communities. We hope that you’ll check it out and consider joining. Whether it be for the monthly training and drill videos, discounts on products in our store, the monthly Guardian Nation Live broadcasts with top industry professionals, or the quarterly box of hand-picked Guardian Gear, there’s something for everyone in becoming a member of Guardian Nation. Check it out at www.guardiannation.com.

Pick of the Week

One Response to Episode 87: Interview With Top Shot Gary Quesenberry