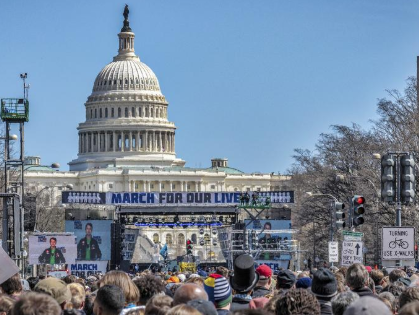 Steve Sisolak stares out his car window at the Las Vegas Strip. “I’ll never forget driving down after the shooting,” he says to the camera. In the background a piano plays a somber note. “Walking through the site,” he continues. “Hearing cellphones ringing with people trying to find their loved one.” We see images of traumatized victims and police officers after the Las Vegas shooting that killed 58 people. “When I’m governor,” Sisolak declares, “we’re going to ban assault rifles, bump stocks, silencers. We need to take action.”

According to the Wall Street Journal, Americans are more likely to see ads that promote rather than oppose stricter gun control laws. States like Nevada and Florida that saw zero gun control ads last midterm have already seen over 45,000.

The increase of ads is a result of the gun-control lobby’s deepening pockets. Every Town for Gun Safety, funded by Michael Bloomberg, has pledged $8 million to anti-gun candidates. Families vs. Assault Rifles, the Super PAC started by parents from Parkland FL, also promised to fund anti Second Amendment candidates. Major corporations like Levi Strauss and Bank of America have thrown their support to stricter gun-control initiatives.

To be fair, many of the anti gun ads have taken place during the primary season, when rhetoric is more extreme. The NRA has stated that is has only begun to spend money on the midterms. Already there are pro-gun messages running in Montana and West Virginia.

Yet the statistics raise alarm. It’s no secret that the gun-control lobby sees the midterms as their best chance to curtail the Second Amendment, and they’re putting their money where their mouth is. They’ve already made gains in state legislatures and now look to push their agenda at the federal level. With November fast approaching, the ads aren’t going to disappear anytime soon.

What do you think? Will the increase in anti-gun ads have an effect on the midterms? Let us know in the comments below.

*Editor's Note: If this tells us anything, it's that we need to get out and vote this November.*