Join Our Newsletter
Shop Our Store
MAIN MENUMAIN MENU
By Matthew Maruster on July 13, 2022 in Survival

Most people know that lethal acts of violence happen all over the country. But knowing about violent crime differs from understanding the nature of a violent attack. Surveillance videos like the one of this encounter provide invaluable lessons that we would do well to study.

This video captured an incident in the city of Philidelphia. For context, Philidelphia is toward the top of the list in crime. The BFIs Uniform Criminal Reporting (UCR) numbers from 2019 show the murder rate in Philadelphia is 22.7 murders per 100,000 people, ranking it 16th on the list for most murders per capita of major cities in the country. 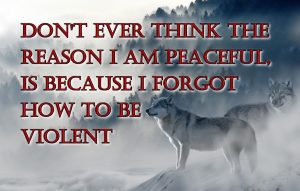 We do not seek conflict, but when necessary, Your ability to act decisively and with violence can save your life.

According to the post from LawOfficer.com “…robberies involving a handgun in Philadelphia spiked 63.21% year-to-date, rising to 1,526 from 935 reported during the same period in 2021, according to public police statistics.” I mention all of this to say, while crime happens everywhere, try to avoid areas with high criminal activity. If you can't, there is even more reason to consider making yourself a harder target by training both mentally and physically in the many facets of self-defense.

Now, back to this incident.

Out Looking for a Victim—

In the video, we initially see one suspect (S1), a Hispanic male wearing blue jeans and a black hoodie sweater. This suspect approaches a man walking the opposite way on the sidewalk, but he doesn't attack. S1 throws his hands up as if to say, well I missed my opportunity. Could it be he didn't attack this person because he thought the person was aware or ready for an attack? Could it be the man looked tougher, and S1 decided to pick someone who he felt would put up less resistance? All of these things are possible, but as we will see, S1 is not good at identifying who the easy target is. 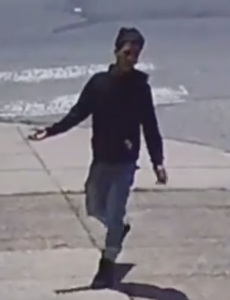 Priorities in a Fight—

In the next clip, S1 already drew a handgun, and is engaged in a struggle with the victim. The victim fights to gain control of the suspect. It looks like he has one arm wrapped around the suspect's arm and grabbing him by his hoodie near his shoulders. The victim locks onto the wrist of the hand that is holding the gun. I don't know the victim's training background, but he wisely isolates and controls the suspect's hand that holds the weapon. 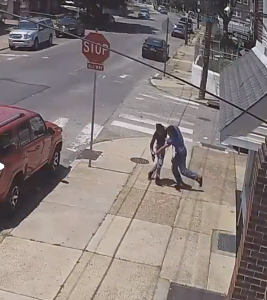 In the next clip, the victim and suspect remain on their feet as the victim pushes the suspect backward. The two men ultimately run into a stop sign, which may have been the victim's intent. The suspect ends up on one side of the pole, with the hand holding the gun on the other, giving the victim more leverage on the gun. S1 attempts to pull from the victim's grip by slipping out of his sweater, which only ends up binding his arms together awkwardly. 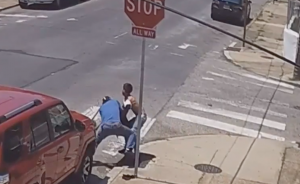 Consider how the victim even used the suspect's clothing during the confrontation. Have you thought of this as part of physical self-defense? Have you thought about how the clothing you wear could hinder your ability in a physical fight?

Gain Control of the Hand that Holds the Weapon—

Let's pause and consider the victim's options. He can't stay on top forever, and nobody is coming to his rescue. His only genuine option is to disarm the suspect. Ideally, if he has complete control of the gun, he could break contact and move to a position of cover. As we see, the victim is in a position of advantage with the suspect face down.

But he doesn't yet have control of the gun, so while even though he looks to be in a position of advantage, the suspect is still an imminent deadly threat. The Victim has a strong case to use deadly force against the suspect. Does that change if the victim were to disarm the suspect? It's unwise to make definite legal predictions based on a hypothetical because there are too many variables, but it's worth considering.

If disarmed, no longer fighting, and in this position, shooting the suspect in the back of the head might not be the best option. Then again, even if disarmed, the proximity of the suspect, coupled with his aggressiveness, would make that decision much easier with even the slightest movement to resume the fight. 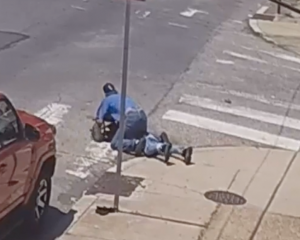 Here, the victim had little time to consider if he should shoot the suspect or not, because S1 had a buddy (S2) watching from a nearby vehicle.

S2 comes rushing in, armed with a handgun. Did S2 yell as he ran toward the men, or did S1 call for help? I don't know, but I think it's the latter. Whatever the reason, the victim remained alert and noticed the second attacker even while fighting for control of the gun.

So while physical defensive skills kept the victim alive for the first part of the fight, it's his awareness that saves him here. Had the victim not been aware, S2 would certainly have executed him right there.

S2 begins shooting at the victim. The victim wisely rolls, and uses S1 as a ‘human shield' as it were. This gave him some temporary cover. Introducing a second armed attacker gives the victim only a split second window of opportunity to survive this fight. By rolling and placing S1 between him and S2, the victim not only had some cover, but used a technique called stacking. Stacking is useful in closing the angles when attacked by multiple threats.

At this moment, it looks like the gun S1 and the victim are fighting over discharges. It seems like the victim has partial control and directs the round(s) toward S2. S1 starts to break contact.

Let's pause to notice something interesting about the victim. We don't know what self-defense training the victim has, but we see that during this exchange, the victim has his legs wrapped around S1's hips. Perhaps the victim has some grappling, jujitsu, or some other martial arts training that helped him control S1. 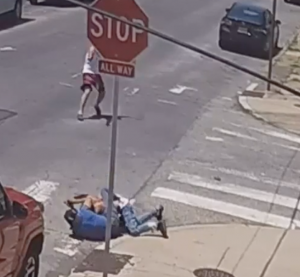 The Will to Survive—

S2 moves to flank the victim to get a clear shot on him. At this moment, S1 gives up and is in full on flight mode, giving the victim complete control of the gun. As S1 tries to break away, the victim uses S1's gun to shoot at S2, who is blindly firing at the victim.

Notice the distance between S2 and the victim is maybe 10, maybe 15 feet. And the victim is shooting one handed at a standing attacker, while laying on his back. Is this how most concealed carriers run through drills on the range? Of course not. And while you may never need to shoot from this position, is it worth understanding the limitations and principles of how to do it?

If you've never considered these things, this course Fighting From Cover With Unconventional Shooting Positions would be a valuable resource.

It appears gunfire struck the victim during the exchange, and the article confirms he suffered wounds to his buttocks and ankle. Although injured, the victim fights, landing what appears to be at least one shot on S2. It's likely S2's decision to flee results from him being shot. How critical is it we remain in the fight and not give up? 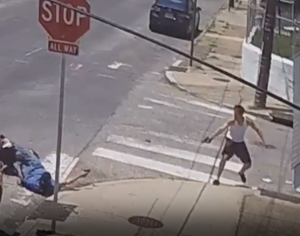 Finally, we know the victim is 46 years old, the same as me. And while not elderly, no spring chicken. The suspects, on the other hand, appear to be teens or young men, perhaps between 16-20 years old. The age of suspects committing violent crimes is trending younger and younger. Don't assume a teen is not a threat. We also should maintain our physical health to the best of our abilities.

As a last consideration, how would the incident change if the victim had access to a concealed carry handgun? Could he access it in the different inside the waistband (IWB) positions? Which ones would provide better access than others in this fight? What about if it were in the victim's bag he appeared to have slung across his body? How does carrying off body help or hinder your response? Have you practiced drawing from unconventional positions? 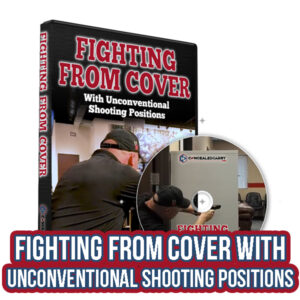 If you haven't thought about these things and the way you carry your firearm, maybe you should.

Let us know what you think in the comments section. If you enjoy this content, please consider checking out Guardian Nation. Your membership gives you access to member only content, our training library, discounts and a quarterly gear box delivered to your house. You can learn more about Guardian Nation by clicking below.