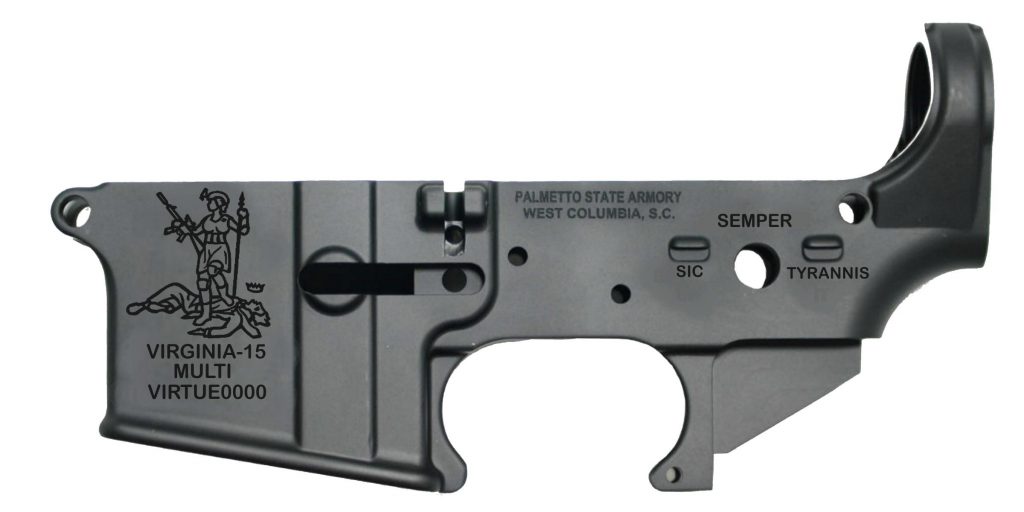 I'm all about flipping a bird to the man in charge when it comes to gun rights. And if you haven't been following, the state of Virginia is finding itself further up that creek and they really need all the help they can get. Well, apparently, here is a good chance for you to help them out a bit, while getting yourself a brand new AR-15 lower at the same time.

PSA just released their limited edition Virginia-15 lower with selector markings “SIC,” “SEMPER,” and “TYRANNIS” instead of the usual SAFE, FIRE, and AUTO selections usually found on such rifles.

The lowers are further engraved as you can see in the above picture and cost $59.99 with 10$ of each sale to be donated to the VCDL (Virginia Citizens Defense League).

Here is a bit of text taken from their website giving more information:

Paying homage to the Commonwealth of Virginia, Palmetto State Armory’s limited edition “Virginia-15” AR-15 lower commemorates our brothers and sisters in Virginia and across the United States civilly advocating for the fundamental rights of all law-abiding citizens to keep and bear arms as guaranteed by the Second Amendment to the United States Constitution.  $10 from the sale of each of these receivers will be donated to the non-profit Virginia Citizens Defense League to support their efforts to defend the Second Amendment and constitutional rights.

These forged lowers are quality made, MIL-SPEC designed and use 7075-T6 Aluminum. The Palmetto State Armory “Virginia-15” Lower will accommodate all AR-15 platform builds and is marked “Virginia-15 MULTI”. The finish is MIL-A-8625, Type III, Class 2 black.

Most recent news out of Virginia:

Between 75 and 80 of Virginia's counties have considered themselves to be a Second Amendment Sanctuary and will not enforce any unconstitutional gun laws the newly elected government passes.

Because of this, some of these lawmakers were recently quoted in saying that they'd at least consider sending the National Guard to force local sheriffs to follow any passed unconstitutional laws which could effectively declare war on its citizens.

Just to be clear, these are tens of thousands of citizens (across at least 75 counties) who are not in violation of any laws as of right now, but with the flick of a switch, will be felons next year. That is not good, and I spoke about some potential issues concerning a civil war sparking from this, here.

We cannot allow this to stand and must do whatever we can to help.

You can buy your PSA Virginia-15 rifle lower here, find out more about the Second Amendment group, the VCDL here, and leave any comments you have about this nonsense or the sweet rifle lower, in the comments below.

Debunked: Reasons Why People Don’t Buy A Shot Timer
Episode 374: “I Saw He Had a Pistol…He Saw Me, and We Exchanged Gunfire.” – Interview with Stephen Willeford