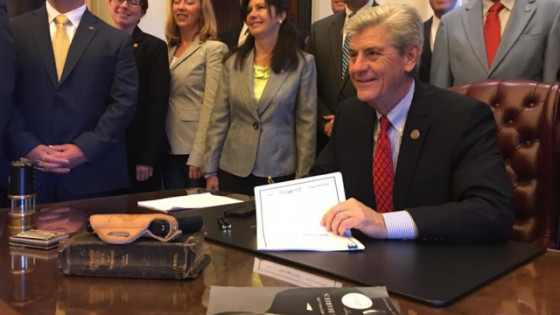 On April 15th, 2016 Governor Phil Bryant of Mississippi signed HB 786 with his tattered bible and gun sitting next to him.

Mississippi now joins a short list of constitutional carry states that allow citizens to carry a concealed handgun without requiring any licensing or permitting.

Today I signed House Bill 786 to give churches the right to protect themselves from those who would harm them while they worship,” Governor Bryant said in a statement. “I’m a strong supporter of Second Amendment rights and will continue to advocate for your right to keep and bear arms.

In addition to permitting concealed carry without a permit the law also removed the previous state restriction that prohibited guns in all churches. (States that allow guns in churches)

Bloomberg's gun control groups flooded the state with advertising to attempt to stop the bill from passing but it was in vain. The state representatives and senators heard their constituents and a good law was passed.