Join Our Newsletter
Shop Our Store
MAIN MENUMAIN MENU
By Joshua Gillem on July 20, 2020 in News 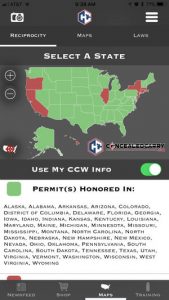 The Concealed Carry smartphone application was experiencing problems for Apple Phone users, but has been fixed.

Again, the app is fixed so you can go on using it as normal, once again.

What follows below is the original announcement explaining what happened to the app:

If your phone is made by Apple and you have the Concealed Carry App you may have been noticing some of your features have not been working properly.

For example, one of our most popular tools inside that application is the reciprocity map builder. It has not been functioning properly for Apple phone users for a short period of time, and the reason why is out of our control.

A series of Apple updates have caused unforeseen problems for the functionality of the app, but please know that our developer is on top of it and a fix is coming.

Please do not remove the app from your phone. When the issue is fixed we will let you know.

Android users are not affected and should not see any functionality issues.

Have You Made The Switch To A Nylon Gun Belt?
Shooting Outdoors and Cleaning Up Afterwards

One Response to Concealed Carry App Fixed For Apple Users