Join Our Newsletter
Shop Our Store
MAIN MENUMAIN MENU
By Riley Bowman on May 2, 2016 in Justified Shooters, News, Podcast 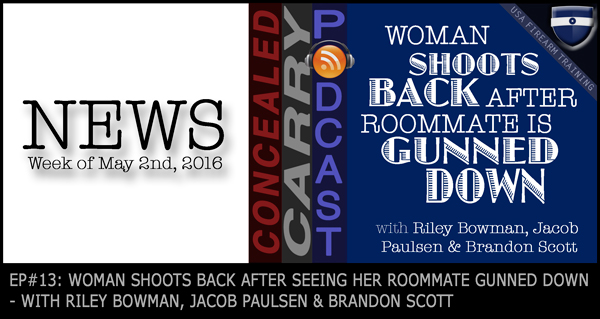 In today's episode we talk about a Washington woman who defends herself after seeing her roommate shot and killed and a Montana citizen who pulls off the famous kill shot. An NYC official is arrested in connection to taking “permit bribes” and someone is getting shot over their seat choice in a PA church. This and more on today's episode.

News Shared In This Episode

Today’s episode is sponsored by L.A.S.R. – Dry fire training is critical but are you getting as much out of your dry fire training as you should? Use LASR software on your existing laptop in combination with any laser emitting training pistol to get your shot times, run drill, diagnose problems, and increase speed. Trust me it will change everything about how you approach your firearm training and triple the speed at which you improve your skills. Purchase your copy today at www.concealedcarry.com/lasr

4 Responses to Episode 13: Woman Shoots Back After Seeing Roommate Gunned Down