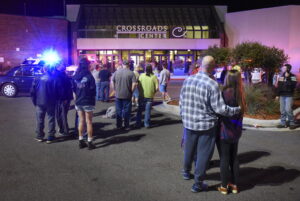 At a St. Cloud, Minnesota Shopping Mall, Saturday night, a man with allegiances to ISIS committed a series of stabbings to 8 individuals until he was shot and killed inside the mall by an off-duty officer. St. Cloud police.

In a media briefing after midnight on Sunday, St. Cloud police chief William Blair Anderson said an off-duty officer from another jurisdiction, later identified as Jason Falconer confronted and killed the suspect. Chief Anderson then continued about the suspect, stating that he was dressed in a private security uniform and asked at least one victim whether they were Muslim before stabbing them, all the while referring to Allah during the attacks.

Anderson declined to call the stabbing a terrorist attack, saying the motive for the attacks isn't known yet. “We will be diligent and get to the bottom of this,” Anderson said, adding that St. Cloud Police had prior contact with the suspect, but only related to traffic stops.

Anderson added that of the eight people that had been taken to the hospital, all but one had been released at the time of this article's release.

“It's an awful day,” Anderson said, adding that St. Cloud “won't be the same” after the attack.

After the attack, ISIS claimed responsibility saying that the attacker was a “brother” of theirs.

As for the shooting savior, Jason Falconer is the president and owner of Tactical Advantage LLC, a shooting range and tactical training facility with a strong focus on arming concealed carriers. He’s also a former chief of the Albany (MN) police department, and he remains a part-time officer.

“Clearly he is a hero. Officer Falconer was there at the right time and the right place.”

“None of us ever want to have to do that,” said Chief Blair Anderson, “but that’s what we’re here for, and Officer Falconer’s actions were swift and direct, and in my opinion appropriate.”

So with that, we see perhaps the truest and most high-profile showing of what a person with proper concealed carry training can do to save a number of people. Officer Falconer is the prime example of doing the right thing at the right time, and lives were saved because of his training and his fortitude.