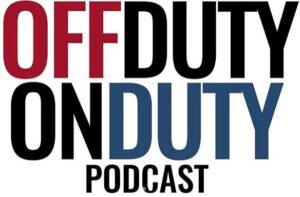 It's my pleasure to announce that the Concealed Carry Podcast Network has grown a bit more by adding a new show to the lineup. The new podcast is called Off Duty On Duty.

The podcast features a host who has several years of experience as a police officer and gun instructor.

As of this writing there are a handful of podcasts that you can pick from, and the host, Bryan, has experience creating shows and is great at bringing the listener in and and keeping them engaged.

The Off Duty On Duty Podcast is a show hosted by a cop with more than 17 years on the Oklahoma City Police force and discusses important topics from the point of view of the police officer, as well as the concealed carry citizen.

The goal is for both active and retired police officers to enjoy the show, as well as civilian gun carriers.

Some of the topics currently already recorded and published on this podcast are as follows:

New shows are being added regularly, so make sure you check the show out and subscribe so you can be notified whenever new shows are announced.

The host is Bryan Eastridge who is a current police officer and firearms instructor in the great state of Oklahoma. He also served honorably in the US Army as an infantryman and Ranger in the 82nd Airborne.

Bryan shoots USPSA, IDPA, and 3-gun competitions as a hobbyist and is also the co-founder of one of the best gun belt companies out there, the EDC Belt Company.

He brings a wealth of knowledge to the Concealed Carry Podcast Network, and we're happy to have him on board.

This podcast is available on any and all of your favorite podcasting platforms that pull from Google, Apple, Stitcher, TuneIn, etc.

And of course, you can also check it out on the newly launched website, here.

Make sure you subscribe to the podcast, and also check out their newly launched Facebook Page, here.

The Concealed Carry Podcast Network has grown again. What started with one show hosted by Riley and Jacob, has slowly turned into a network of four different shows covering a range of topics.

For information on the other shows, check out this page, next.