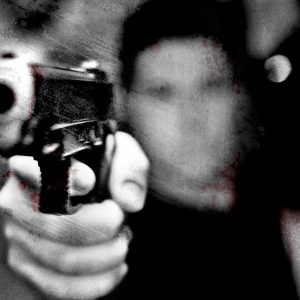 In West Philadelphia, a man shot a home intruder entering his home late in the night. But this wasn't just any home intruder. This was the shooter's girlfriend's ex-boyfriend. This was the second time that night that a break-in was attempted by the ex and the current couple were in fear of their safety.

The ex-boyfriend, who is also the father of the woman's two children, first tried to force his way into the home, in Mill Creek, through a kitchen window about 1 a.m., according to police. During this time the woman and her current boyfriend were able to push him back outside, though, investigators said.

But this did not deter the ex, who found his way in via a different path.  A little later, the man broke into the home through a second-floor window. Once inside, police say the man began to attack his ex, assaulting her. Her current boyfriend then produced a gun and shot him in the chest, police said.

The ex died a short time later at a nearby hospital. Police have not identified the man, only saying that he is 33 years old. His two children with the woman were in the home at the time of the shooting.

Upon the writing 0f this article, the police were in the process of interviewing those involved.

Craig Martin grew up in the unincorporated town of Lewis, Wisconsin. From a young age, Craig was introduced to guns, as he was tasked with defending his backwood home’s wiring from a scourge of red squirrels. Ever the animal lover, though; Craig couldn’t let these creatures die needlessly. So he would take his kills and leave them for the foxes, coyotes, and bears to eat at a deer feeder his grandfather built around their home. His lifestyle made Craig understand that guns are a tool and ever since, has spread the word about how firearms are not a menace, like the red squirrel, but an item to help people. He instils this in every article he writes for USA Firearm Training.
View all posts by Craig Martin →
Episode 59: 3 Examples of Dumb Things a CCWer Should Never Do!
What are you Protecting Yourself From?