Join Our Newsletter
Shop Our Store
MAIN MENUMAIN MENU
By Matthew Maruster on September 29, 2022 in Safety

Surveillance video at a Queens, NY subway stop shows the brutal assault of an innocent woman. The incident took place in the morning as the victim rode the subway to work. According to the victim and witnesses, a homeless man was riding in the same subway car as the victim. He tried to engage her in unwanted advances, which she ignored. The homeless man exited the car with the woman and chased her through the subway station. The video shows the moment he caught up to her.

The victim did what she could to avoid and escape, but that isn't always possible or successful, as we see here. Physically stronger, faster, and intent on hurting the woman who dare refuse his advances, the attacker overtakes her. Once he catches her, he lets his anger out by punching and kicking a weaker human being.

Had there been a police officer in the station, he could have intervened. But police cannot be everywhere, and attacks like these happen so quickly that it is really rare that an officer is already on scene to stop the assault. More often than not, officers arrive after the fact, just as what happened here.

Unfortunately, two other people in the area when the incident occurred failed to help the woman. We see the first man running away in the same direction as the victim. It appears as though he saw the man chasing the woman, and instead of helping, ran away, leaving her to fend for herself.

The second man comes into view while the suspect pummels the victim with his fists. He looks like he wants to help the woman, but when the suspect turns around and looks to challenge the man, he turns around and runs away. Once again, a man runs away, leaving the woman to fend for herself. The suspect turns back to the victim, and it's now that he kicks the woman in the head. This part of the assault may very well be what causes her to lose her vision. 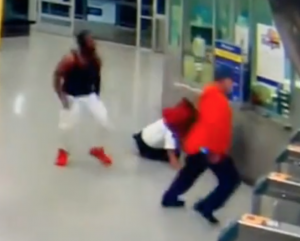 More of the Same —

I find it disturbing, but not surprising, that the only two people who could help the women ran away. We certainly don't want to involve ourselves unnecessarily in other people's issues. However, this is one of those incidents that requires intervention. A defenseless woman is getting thrashed by a man and it's clear the attack will cause serious bodily injury.

Perhaps neither one of these men had the physical ability to stop the man, and it's appropriate to consider the attacker may have a weapon. But I think the failure of men interceding to protect a woman goes beyond just this one incident. I narrowed a search of similar incidents where a man assaults a woman at a subway in the presence of men. I've included just some of the many news stories matching these criteria.

I could include many more videos, but I think you get the point.

Protecting Those in Need —

Again, I want to clarify that no one is obligated to intervene, and certainly, in many situations, it's better to stay out of the situation. However, we need to be aware of when intervention is necessary, and when it is, we need to have some skills to help.

You don't need to be an MMA fighter or a muscular monster to help in time of need. In the video below, an average guy intervened to stop a man from continuing to stab a woman with a knife. He responded, and perhaps because of his action, other people helped and disarmed the attacker. The point is, just like cowardice, bravery can be contagious.

New York has recently created more stringent restrictions on the right of law-abiding citizens to carry concealed handguns for self defense. One such move was to criminalize those with concealed carry licenses from carrying in the subway system. Given the massive increase in violent crime in the subway, I think this is clearly counterintuitive if public safety is the goal. But the point of this post isn't to highlight the idiocy of the New York Law.

Rather, I just want to remind the reader, that it is foolish to entrust law enforcement, or lawmakers with your bodily protection. Your action or inaction in the face of evil may be the difference for you or someone elses survival. Have you prepared?