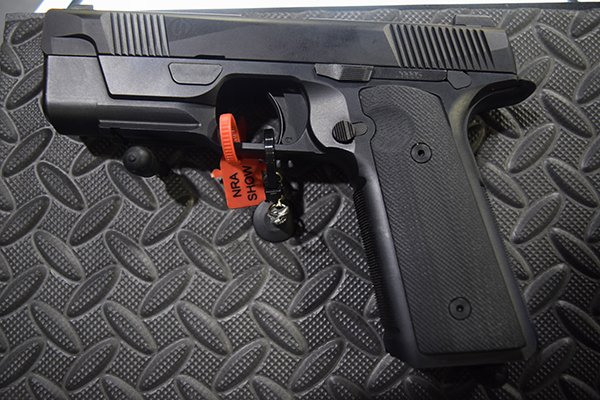 The Hudson H9 is one of those revolutionary firearms that forces you to give it a second look just to be sure you know what you’re looking at. And in fact, chances are good that at first glance, you think you’re looking at a 1911. That forced second glance, however, reveals that this “1911” does not have a hammer.

So, it must be more like a Glock, right? But … That doesn't work either because, well–look at it! It's different and is something in between the two.

What exactly is the Hudson 9 pistol? Let's take a look.

Overview of the Hudson H9 Pistol:

I first got the chance to see the Hudson H9 at SHOT Show, 2017, more specifically on range day. Sadly, I hadn’t had the opportunity to fire it because it was the end of the day and the last of the buses were getting ready to drop us weary, sun-scorched souls off at our respective hotels.

I wasn’t about to get stuck out in the desert when I should have been in my hotel, resting for the marathon ahead. Still, I regret not making it up the hill sooner, because I now have to wait until SHOT Show, 2018 rolls around to give a real opinion.

I did have the chance to talk to many other folks who had the opportunity, and most of them had raving thoughts about the Hudson 9, how different it was, and a few even said the word “Finally” when they were describing it. I do want to say, in fairness, that not everyone is as excited for its release as we are, but like me, they haven't shot it yet, either.

My good friend, Annette Evans was there at range day, and mentioned shooting it. So I asked her what she thought, and if she'd be willing to go on the record.  She obliged. By the way she is a competitive shooter, certified gun instructor, and gun range owner–if any of that matters to you. She had this to say:

I didn't get more than a magazine or so with the H9 so I don't have a whole lot to say about it besides the fact that I was really impressed by it as a first offering from a new company and found it comfortable and interesting to shoot with a recoil pattern and return to target that made me want to shoot it more. It was certainly less blocky and awkward than it seemed it might be from the initial pics. I also very much appreciated that they were thoughtful enough to start thinking about accessories and aftermarket from day one. I'm looking forward to seeing it actually hit the market because I think it's a platform with a lot of potential.

Why this 9mm handgun is different:

Like Annette, we also believe it has potential. We are doing everything in our power to get a test pistol, and as soon as we can, we promise to run it through our paces to see what it can do. But, in the mean time, let's get back to why we think this pistol is a manufacturing marvel …

We are told that the 1911 and the Glock got together and had a baby, resulting in this beauty. In a sense, though, the Hudson H9 is more than just a combination of two of the best handguns ever built, and is really nothing like either of them. The overall design of the gun is meant to prevent muzzle rise as much as possible. From the 1911 style trigger, to where you grip the gun, and everything else that has been done, the result was a lesser recoiling gun with a lower bore axis.

Rather than me boring you on some of the engineering behind it, let me just show you a short video clip I pulled from one of our Guardian Nation videos, showing just one small thing that's different:

As you can see from that video, the Hudson H9 is a manufacturing and engineering marvel that completely changed the design of the pistol. The bore axis was dropped when they lowered the barrel and recoil spring, but further than that, the trigger and its guard have been moved up to be inside the gun, rather than simply looking to be added on, like most other pistols on the market.

John Moses Browning changed the world with his M1911 and Glock did that again when they made the first commercially viable striker-fired, polymer-framed pistol.

Whenever you redesign something, it's going to cost money. Therefore, the Hudson H9 Price is nothing to sneeze at. MSRP is stated to be set at $1147.00, but when you think about it, that's what you'd expect to pay for a quality M1911A1 from a decent manufacturer.

Speaking of 1911s, while the Hudson H9 pistol doesn't come with anything more than a trigger safety, you can opt to install a 1911 style thumb safety, that is supposed to feel right at home for us 1911-loving folks.

In conclusion, is this 9mm handgun, the Hudson H9 pistol the next evolutionary step in firearms design? Time will tell, but we are looking forward to finding out starting on June 26th, when they start shipping them out.

A word about Guardian Nation:

That above video clip is taken from a Guardian Nation video that was live-streamed to everyone who is a member. All who were there had the opportunity to ask the Hudsons questions, and get them answered right away.

GN, as we lovingly call it, is a tactical subscription box on steroids. For the monthly (or annual) fee, you get a quarterly box filled with useful stuff that meets or exceeds the price you pay for your subscription. In addition, you get to attend the live interviews, access to our extensive training library, free in-person classes, and 10% off everything we carry in the store.

Oh, you also get some freebies, as well. To learn more about becoming a member of Guardian Nation, and seeing all of the benefits (I did not include them all), hit that link.

5 Responses to Hudson H9: An Overview Of An Engineering Marvel

Leave a Reply to Ken Click here to cancel reply.