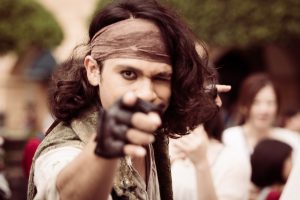 One-eyed pirates have taken over the local gun ranges across America.

I have seen a pandemic of sorts, affecting many gun owners. The disease presents itself primarily when the gun owner is shooting. The symptoms are quite easy to spot. This despicable disease causes the shooter to inexplicably turn into a one-eyed pirate. Fortunately, I have not confirmed any cases where the disease has caused the shooter to forego a real leg, for a wooden peg.

All joking aside, shooting with only one eye open is something that is common with shooters. So what's the big deal if someone wants to look like Popeye while they crank off a few rounds?

For the plinker or casual shooter (for whom I have no issues with) shooting with one eye closed, or while using a ‘cup and saucer' grip is not a concern.

When this is the go-to skill for a defensive shooter, problems arise. Don't get me wrong, shooting with one eye is a great way of having ultra-focus on the front sight while achieving sight-alignment and picture. But the defensive shooter needs to develop a different skill more applicable to a deadly force encounter.

Most of us first learn to shoot with one eye closed. Maybe because we started out with a rifle, or because it is easier to focus on the sights with one eye. So shooting this way quickly becomes a habit, and it's hard to break. Forcing yourself to change is the only cure.

Practicing something new feels weird, I know. But it won't feel natural and automatic until you have repeated it hundreds of times. So don't wait until a range day to start practicing. Start right away by incorporating this into your dry-fire routine.

I told you it's important that the defensive shooter learn to shoot with both eyes open, and here's why:

1. Tunnel Vision – The human body has certain physiological responses to stress. One thing that happens to our bodies under stress is to lose our peripheral vision. Also known as tunnel vision, our field of view shrinks considerably.

You can imagine how tunnel vison, coupled with closing one eye can cause problems during a deadly force event. Additional threats or innocent people may go unseen. But it's not just people that we may not see. What about other dangers around us, like a busy street or a stairwell. And what about trying to create distance, or move to cover? When we are affected by tunnel vision, we may not see the perfectly covered position or exit just a few feet away.

2. Slows Down Our Shooting – This is not only a concept, this is a reality and is backed up with numbers. Closing one eye, and attempting to get sight alignment and sight picture before squeezing the trigger takes time. Time frankly you may not have when you're fighting for your life.

The alternative is what has been taught for many years and called a number of names: point shooting, combat shooting or front-sight focused shooting. Essentially it is relying on your body's natural alignment and kinesthetic awareness to aim rather than relying on the sights. 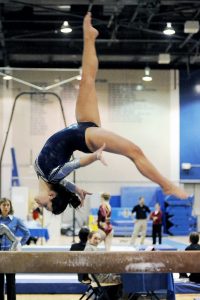 The same Kinesthetic sense, (the ability to know where our body is moving in the space around us) that gymnasts use to perform incredible feats, allows the shooter to get hits on the target without reliance on the gun's sights.

In practice, the shooter has both eyes open and focuses on the threat, rather than the sights. The front sight may appear in the shooters field of vision as it lands in the hit-zone of the threat. At this point, the trigger is squeezed. It's intuitive and with proper alignment and practice, quite simple.

How do I know this is faster? About 2 years ago I started running all my concealed carry students through the ‘controlability drill.' You can modify several aspects of the drill, but for the basic concealed carry class I run it as follows:

The students overwhelmingly shooter faster and have more consistent hits on target at the end. Not just slightly better, but drastically better. The number to focus on for this discussion is the time to first shot. Shooters usually make the most improvement here. Why? 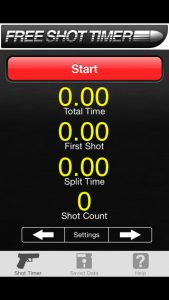 Use of a shot timer can give you feedback on just how much time it takes you to get shots on a target. While good timers are worth the money, in a pinch you can download a free shot timer app on your smartphone.

Because the first time around, even at only 3 yards, the student is concerned about pinpoint accuracy. They close one eye out of habit and look for that perfect sight alignment and sight picture before squeezing the trigger.

When the shooter applies the skills practiced in the class, they are able to get the gun where it needs to be much more efficiently. This results in quicker first shots, and when applied correctly, increased accuracy. 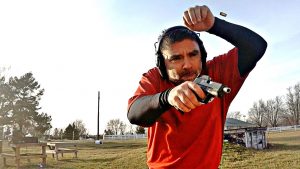 Keeping both eyes open while shooting is critical to breaking tunnel vision.

Learning to shoot with both eyes open is something every defensive shooter needs to learn. Shooting like this goes hand in hand with point shooting etc., and is a core fundamental for shooters who may have to operate under stress.

Once you reprogram your brain to keep both eyes open, shooting your gun will be a whole new experience. Going back and shooting with only one eye, will make you feel strange and you will realize just how much of your surroundings you have been missing.

Did you know that we teach shooter's skills? Check out Guardian Nation to learn more info.

Episode 169: Good Guy With a Gun Stops Child Abduction
What do Santa Claus and Freddy Krueger Have in Common?

20 Responses to You Have Two Eyes, Use Them Both While You Shoot