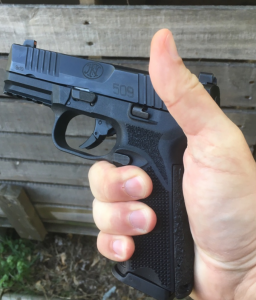 I watched a video of someone who was clearly a new shooter this past weekend who had a serious case of over-gripping her gun. It was so bad I was able to visibly see it while she was shooting.

This can also be known as not isolating the trigger finger, and happens to most shooters whether they know it or not, to at least some degree.

The main problem with this is that it'll actually force your shots to either side, depending on if you're a lefty or righty, and is a headache for most shooters.

The problem, is that they don't even know it.

There are ways to combat this, which we'll get to in a moment, but before we get there, let's focus on how you can tell if this plagues your inaccuracy problems.

Perhaps a more accurate description of this, is that as you're pressing the trigger, a sympathetic response to your trigger finger moving is that the rest of your fingers also move. This is bad because as they grip down further it can move the front sight of the gun off target, ever so slightly.

The first time I found out about this problem in my own shooting is when I was testing the MantisX Training Tool. And, while I thought I had overcome this in my own shooting, Chris Cerino pointed it out to me in the Combat Handgun class I took with him almost two years ago.

And, while I recommend the Mantis X and taking an in-person class from a pro to everyone, it may not be feasible for everyone to do.

For the above-mentioned shooter, I could see her entire hand clenching and releasing with each trigger pull. It was extremely evident to me and I wasn't there with her in person. It was so exaggerated that I could see it.

While most shooters won't have that much of a tightening of the grip when pressing the trigger, that's the first clue that you're doing something similar with your hand when you're shooting.

Try to see if you can see your hand tightening down as you press the trigger. If you can't physically see it, have someone else look as you're pressing the trigger or record yourself shooting up close.

The second clue is to watch your strong-hand thumb to see if it's pressing down into your support hand. As you tighten your grip your thumb can sometimes want to get in on the action of joining the rest of the fingers in a fist.

The reason why this happens, is because it's not a natural movement to isolate your trigger finger away from the rest of your grip. It's unnatural for us to move one finger independently from the rest of the fingers on that hand.

Finally, chances are good that if you're shooting to the left or right, it's at least partially due to this over-gripping of your gun as you're pressing the trigger.

One of the best ways to fix this is to have a strong grip from the get go and to do hand strengthening exercises where you can practice moving your trigger finger independently of the rest of your hand.

The reason why this works is simple, you're training your trigger finger to move by itself even as the other fingers are gripping the gun.

Another way to fix this is by proper trigger manipulation. I'm not going to spend a whole lot of time on this because Riley actually does a much better job at teaching this than I ever can in the below video. And, while my knowledge of what he is saying is at an intermediate level, I have to admit that he has a pro-level understanding of trigger manipulation.

It's my hope that this helped to teach you something about why you may be pushing your shots either to the right or the left, as well as give you a few different ways to fix this. Leave us a comment below.

Glock’s 43X and 48 Get the MOS Treatment
Still Getting Worse — How Far Can It Go?

7 Responses to All About Isolation of the Trigger Finger

Leave a Reply to PMR Click here to cancel reply.