Join Our Newsletter
Shop Our Store
MAIN MENUMAIN MENU
By Joshua Gillem on June 12, 2017 in Reciprocity 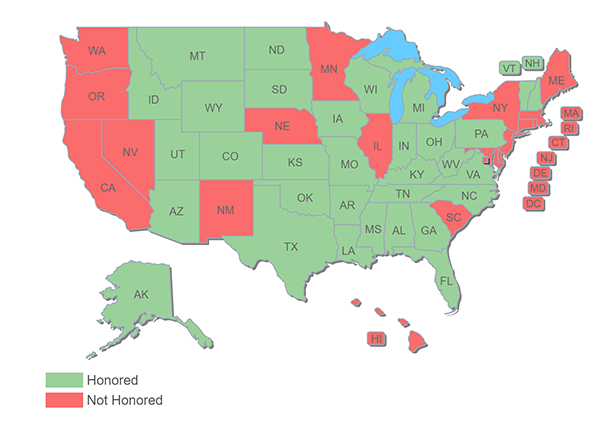 In a growing trend of what can only be explained like this: “The Second Amendment is my concealed carry permit and I'll bring my gun anywhere I choose,” gun owners decidedly bring their concealed carry guns to NYC, get busted, and do jail time for illegal possession of a firearm. This time around, a man from Georgia, who is legally allowed to have his gun in that state, brought his Glock with him to go sight seeing and got jammed up for it.

The funny, or stupid, thing is that he didn't even have his gun on him when he got busted. Instead, a room service attendant from the hotel he was staying at found his Glock under the mattress in his room at about 11 a.m., and reported it to the cops.

Something similar happened just a month prior when a man from North Carolina brought his firearm up with him, and the hotel staff called the police to report it when they found his pistol under the mattress in his Brooklyn hotel, as well.

First, let me please say that if your hotel has a safe, and you're not bringing your gun around with you on your person, stick it in the safe before you leave, and not under the mattress where someone may find it. Second, to answer the posed question in the title of this article, I only travel to places where guns aren't forbidden. NYC forbids guns, so I never travel there. Maybe you should take the same approach.

Such idiocy underscores the need to implement a 50-state reciprocity law where someone from a freer state like Georgia or North Carolina can travel to a place like NYC with their firearm and not have to worry about going to jail for it. It is absolutely mind-boggling how someone can do jail time for something that is totally legal in their home state, but illegal where they're visiting.

A 50-state reciprocity agreement still seems far off, so I'll offer this instead …

The way our country currently works, is that each individual state controls their own laws. What this sadly means is that the Second Amendment is not our carry permit country-wide, and going to cities such as NYC is bound to give us problems. In fact, traveling to any of the following should likely be off-limits if you still have your gun on you:

That above list of shoddy gun-states is an approximation of areas where you may want to leave your gun at home, but shouldn't be taken as gospel. To be totally sure you should check our reciprocity map to know where you may/may not take your gun with absolute certainty. Available as a download on your phone or viewable on our webpage, it's free to use and is a great tool.

At the end of the day, what it all boils down to is the simple fact that we are hopefully working towards a 50-state reciprocity law that will enable those of us who can legally carry a gun where we are from, to any state we visit without hesitation or fear of being arrested for breaking a local law.

Until that time, we are subject to individual state laws, and it's up to each individual concealed gun carrier to check the laws in each state we go to. Let us know what you think about those guys getting busted in NYC for having their guns in the hotel. Also, what did you think about where they “hid” them?

20 Responses to Is It Ever Okay To Bring Your Concealed Carry Gun To New York City?

Leave a Reply to graphic Click here to cancel reply.