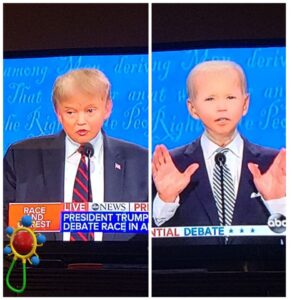 I usually try to keep our topics about guns because that is the topic of our blog, concealed carry and self-defense in particular, but this is somehow indirectly related as social media and Reddit feeds are filled with people taking something President Trump said last night in the debate as a call to arms as they pose with their guns saying that they're ready for war.

I watched the debate and can say that it was in line with the rest of 2020 to date. You know, a hot mess.

Before I move on, let me state that it is my goal to deliver at least a part of this as news without taking any sides as a journalist should do. I'm not a journalist, by any stretch of the term, but to some degree I do report on things and sometimes need to remain neutral. This is one of those times, though I will probably fail and give my opinion anyway because I'm incapable of anything else.

The overall mood of the debate last night closely mimics the mood of the entire country. Both sides are yelling at each other, nobody is listening, and the response is always name calling and criticism. The only difference between last night and the rest of the country, is that the presidential debate was broadcast in front of millions of people to see.

But make no mistake, the left and right (citizens of the country) hate each other as much as Trump and Biden also seemingly hate each other. The rift has been growing for years and I believe it will come to a head, soon.

There was one point of the debate that many on the left are taking as a call to arms to defend themselves. My social media feeds are filled with people, some of them are admittedly friends, who are posing with their guns saying they're ready to be mobilized.

What are they ready for? Well, they're taking the president's statement to, “stand back and stand by,” as the beginning of a race war and are preparing for November 4th.

We all also know that there have been calls for a civil war on the other side of the aisle for years, as well (though I thought it would have been about guns, if I were being honest).

I'd say that we're SADLY (because whoever is calling for war on American soil is pretty stupid) closer to a violent flair up than any point in recent history.

We don't have to look any further than the debate last night. The way those two men spoke to each other, calling names, interrupting, etc., is the way the American people feel, one side for the other.

It seems to be getting worse with each passing day, and I have the strong belief that November is going to be turbulent no matter who is elected.

One thing that we all have to remember, is that the Second Amendment is for all Americans. This is true whether we believe what the people on the other side believe, or not.

They are armed to at least some degree and the pictures I saw on social media proved it.

They are also angry. Perhaps even angrier than we are, which is evident by the riots and everything else going on. So again I say, we're on the verge. We are on a cliff that is crumbling beneath our feet. And I really hope that everything calms down soon.

But I have the belief that it will get a lot worse before it gets any better. So yeah, the debate had more to do with guns than we think it did.

And we don't need a civil war. It won't end well.

Before I ask you to leave your comments below, I just ask that you please keep it civil so we're not hurt in the search engines or advertising.

Leave a Reply to Anne B. Click here to cancel reply.