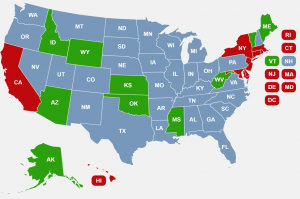 Even as the country is heavily divided on nearly everything these days, almost two handfuls of states are looking to add permit-less carry to their books.

This is something I'm a huge fan of as I feel it's a step in the right direction.

Most states in the union, if they actually allow people to exercise their rights, require applicants go through some sort of state regulated training like I had to do here in North Carolina. However some states, like Pennsylvania when I lived there, just require the applicant to go through a background check in order to get their license to carry.

I have an odd opinion on this, as I believe that anybody who wants to own and carry a gun should get some training on how to use that gun properly, but I don't think it should be forced. I view mandated training as an infringement.

But that's all besides the topic at hand, which is that more states are attempting to join the 16 Constitutional Carry States already in the union. You can see the 16 current permit-less carry states in green in the below map:

I'd like to say that the above map gets updated automatically each time a new state is added to the Constitutional Carry list.

As of right now there are nine other states looking to join the ranks of those who have passed permit-less carry. Those other states are as follows:

While it won't likely pass in all of the above states, there are a few worth noting where constitutional carry should pass easily, like Tennessee where it already had previous support but was derailed by the pandemic.

You can learn more about the different types of permit issue VS Constitutional Carry in this article, and as always please leave your thoughts in the comments below.

Leave a Reply to Brandywine8753 Click here to cancel reply.