Join Our Newsletter
Shop Our Store
MAIN MENUMAIN MENU
By Joshua Gillem on March 22, 2018 in News 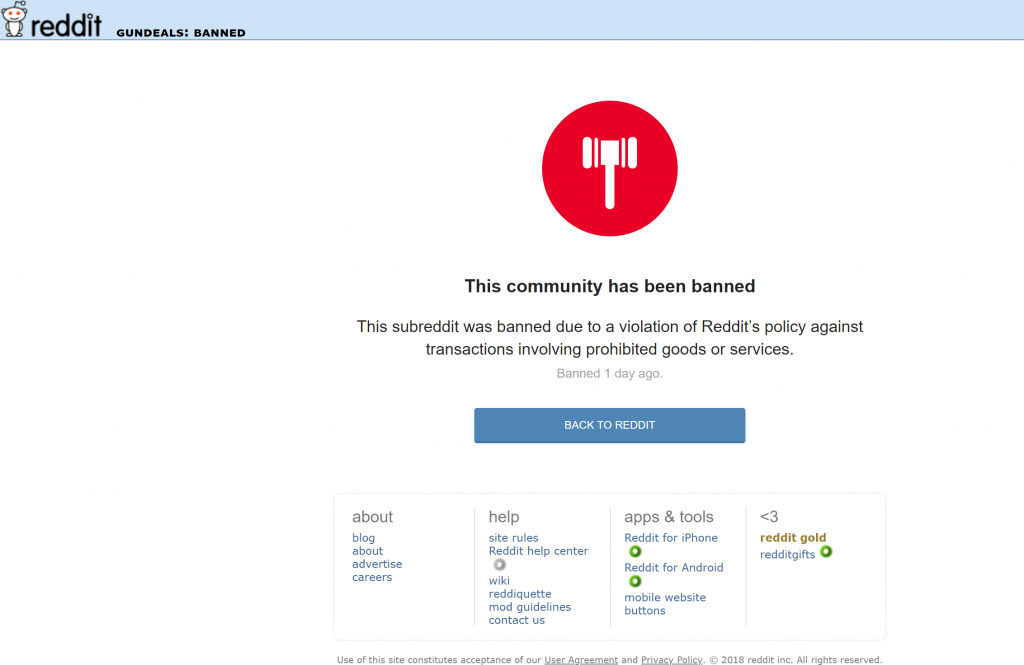 Swiftly on the heals of YouTube announcing some serious changes in policy concerning gun channels, social media giant, Reddit, just laid down the ban-hammer on a couple different, and very large, gun-related sub Reddits. In all fairness, I do need to say that they didn't supposedly just ban gun-related channels, but any that apparently encompass, and therefore break, these guidelines were also probably banned:

Then again as of this writing, I went to a sex selling channel (for research, wife–please forgive me), and found that it was still intact. It seems to me that sub reddits concerning the sale of sex and other prostitution channels seem healthy at this point in time.

Though, I must admit that I did not visit all of them. Time will tell if Reddit will take those down as per their new policy, or if they will leave them up for folks to engage in whatever shady crap they choose.

Ya know, just as long as guns aren't involved.

What is even more disturbing to me, is that subs that seemed to be concentrated only on exchanging brass cases and tools were also banned, likely because they were gun-related. I can say, however, that at this time all of the sub-reddits I belong to are still around, and hopefully they stay that way. But, if Reddit pisses off enough of their following, maybe they'll be forced to re-consider their point of view.

Just one of the sub-reddits that got the ban-hammer was made up of about 120,000 people. One thing these companies and social media giants need to understand, is that we are, as a whole, a community of folks who also aren't afraid to stop using a service because they're anti-gun.

Personally speaking, just as I don't shop at Target and the like, I won't be on Reddit anymore even though my Trophy Case shows a four-year club badge. To Reddit I say, fix yourself. Or, we'll fix it for you. Let us know your thoughts in the comments below.