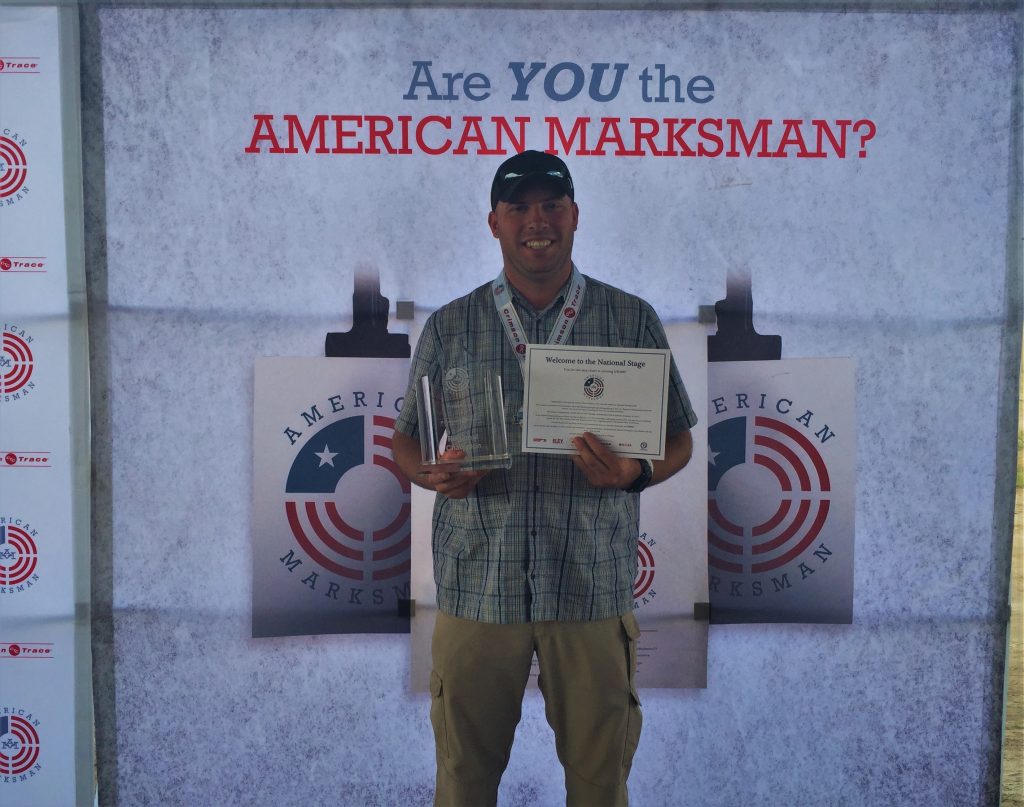 Congrats to our very own Riley Bowman for winning his division at the Rocky Mountain Regional Championship of The American Marksman competition!

BYERS, CO — Some of you may not have heard of the American Marksman shooting competition. According to their website it is a “unique new shooting competition that pits amateur shooters of all ages against each other…for the title of The American Marksman.” The national finals portion of the competition will be held in January of 2017, but to qualify and get an invite to attend you must win one of the four divisions at the regional level: Junior (12-16), Women's Open, Men's Open and Military/Law Enforcement. Qualifying for regionals ended on May 31st and was held locally at hundreds of shooting ranges across the country.

The Rocky Mountain Regional Championship was held June 25-26, 2016  at the Colorado Rifle Club near Byers, Colorado. More than 134 competitors came from Colorado, Utah and Wyoming to participate in the 2-day affair which included five events involving .22 pistols and rifles from Tactical Solutions, the P-09 9mm duty pistol from CZ-USA, the Kel-Tec Sub-2000 9mm carbine, and the Ruger American Rifle chambered in .223 Rem. Courses of fire not only encouraged high levels of accuracy but were also timed to add a speed element. Events ranged from classic marksmanship challenges to quicker USPSA-style courses. Perhaps the most challenging event that saw a wide range of times was a 100-yard shot at a 10-inch steel gong repeated in each of three positions: standing off-hand, seated or kneeling, and prone. Doesn't sound too tough? So, too, thought a large number of competitors who struggled to hit on their first shot by the looks on their faces.

Riley Bowman, senior instructor at USA Firearm Training and Host of the Concealed Carry Podcast, competed in the Military/Law Enforcement Division. He remained near the top of the field through five different events over the two days, but according to Riley it was far from being a sure win:

“I was in either second or third place coming into the final event. Looking at the current leader's score at the 100-yard gong shot, I knew it was a do-or-die moment. Either I could knock it out of the park or go down in flames.”

Riley needed to beat a time of 5.46 seconds for a chance to win. He was surprised when the range safety officer told him his time: 4.33 seconds. Even when the winners were announced Riley was surprised again to find out he had won his division overall:

“I'm kind of still in shock. I didn't think I could do it. I mean, I had confidence in myself, but there were a lot of good shooters there, several of which clearly had the skills to win.”

As Riley is constantly preaching on the Concealed Carry Podcast training is key to success whether in competition shooting such as this or in overcoming a deadly force encounter. He tries to practice what he preaches as he spent many hours preparing for the local qualifier and Regional Championship. Now he is focused on heading to the National Championship and a chance at winning $50,000. He'll be practicing a lot over the next half-year!

Next up are eight other regional championships across the country over the next few months. The organizers are traveling the country running the events along with a TV film crew from the Outdoor and Sportsman Channels documenting the whole thing. The culminating result will be a TV show on those channels especially focused around the National Championship.

We'll be cheering on Riley as he goes for the big win!

Unfortunately, it is too late to qualify at the local level for the regional or national events, but if you'd like to learn more about The American Marksman, you can check it out at: www.AmMarksman.com

Here is the video of Riley shooting his final stage, the 100-yd .223 rifle gong challenge:

And here he is shooting the top total time of 10.96 seconds in the Crimson Trace “Shoot House” challenge, shot with the CZ-USA P-09 9mm duty pistol. Sorry for the weird way the video looks as it was shot using the Slow-Mo setting on the iPhone (but there is no slow-motion in the below exported video). Riley's time of 10.96 seconds on this stage was good for 1st place by only .01 seconds:

Episode 29: The Call for Gun Control in the Wake of Orlando
Episode 30: The CCWer’s Restroom Break

14 Responses to See You at American Marksman Nationals!

Leave a Reply to Donnadewey Click here to cancel reply.