Maybe you heard on the news about the shooting in Houston that killed two people and injured six more. The media isn't hesitant to point out any shootings in this country. You probably however missed any mention of the name Byron Wilson.

On that May 2016 Sunday a man opened fire randomly on bystanders. The shooter, a battle tested Army veteran of multiple tours in Afghanistan was firing with a AR-15 variant. We still don't have a lot of details about the gun used or the number of shots fired but…

We know the shooter wasn't hesitant to fire… look at the number of holes in this police car: 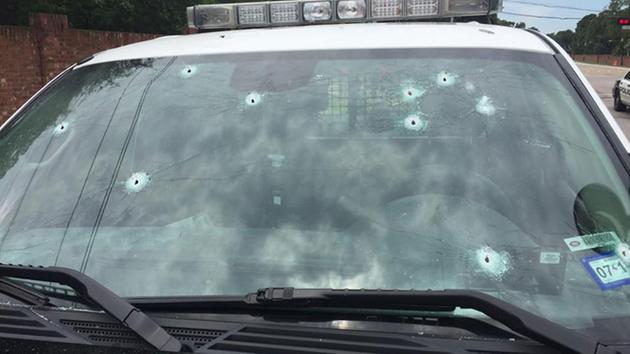 We know that 8 people were shot by the shooter before ultimately police gunned him down.

We also know that Byron Wilson is a hero. Byron responded to the threat by drawing his own legally concealed handgun and firing back. Byron was shot three times by the shooter and is expected to live. What role did Byron's actions have in stopping or slowing down the shooter? We still don't know. What is clear is that the media isn't saying a word about it AND Byron most certainly did respond and almost positively did have a role in saving lives that day.

Hats off to Byron Wilson and our prayers to his family and the families of all those who were killed or injured in this tragedy.

Brave Response Holster [VIDEO REVIEW]
How To Find The BEST Gun Lawyer For You, In Less Than 2 Hours

Leave a Reply to StingraySWC Click here to cancel reply.