Join Our Newsletter
Shop Our Store
MAIN MENUMAIN MENU
By Matthew Maruster on July 17, 2020 in Gear 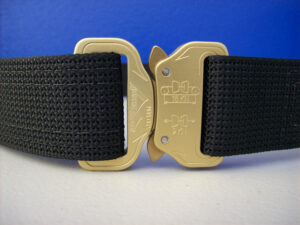 A while back, I wrote an article about the need for a concealed carry belt. In that Article I talked about the importance of having a quality belt to secure your holster and firearm.

Your belt is the piece that will ultimately provide the foundational support to your holster and allow you to comfortably and securely carry your firearm.

I spoke exclusively about traditional leather belts in that article, and while leather belts are preferred by many people, there has been an ever increasing shift toward nylon belts for concealed carry. These nylon belts are not the well known riggers style belts that are usually thinner, tactical nylon webbing and a single layer in thickness.

The nylon belts being made specifically for concealed carry are constructed much differently.

I got a nylon gun belt from Liberty Gun Belts for this article. They make a few different products that come in many different styles. I ordered their EDC (every day carry) 1.5″ gun belt with cobra buckle.

My 1.5″ EDC nylon belt arrived really fast and the customer service was terrific.

They took the time to ensure I ordered the correct size which can be a little tricky if you carry IWB. The nylon belt is made of the same nylon material that underwater dive belts are made of.

It is stiff and holds its shape incredibly well even under weight. Trying to pinch or roll the nylon is impossible and it is this rigidness that provides such great support of the holster.

If you are not familiar with the cobra style belt buckle, it makes fastening and releasing the belt extremely fast, and provides an incredible amount of retention.

There are different styles of belts that allow you to have a fixed buckle that does not come off, or a buckle that can come off easily with a Velcro tab. I tend to like the Velcro tab so I can make minor adjustments quickly. 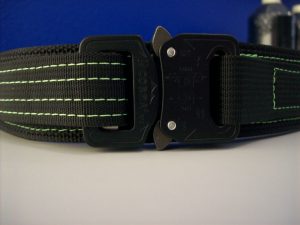 The 1.5″ belt fit through all of my belt loops on my pants. Although I did have a couple pairs of shorts that had very small belt loops where the buckle was harder to get through. I found it faster and easier to remove the buckle and just thread the belt through by itself and then re-attach the buckle when this was the case.

A huge benefit of a belt like this is that because it clips together it does not have to be overlapped through a traditional belt buckle. You may have noticed that with your thicker leather belts, in the front where the buckle is, it will protrude a bit more because there are two layers of leather.

Not with this, and because I carry appendix style, I like the fact that this belt is more streamlined in that area. Additionally, where the traditional belt has holes spaced 1″ or so apart, these belts can be adjusted to any waist size, not just where the holes line up.

During this process, I decided to change to the 1.5″ EDC nylon belt from Liberty Gun Belts for good. I just loved how light and streamlined it was, while still providing an unbelievable amount of rigidity.

The stitching of the nylon on these belts is terrific! I am no fashion icon, but nylon doesn't quite cut it with a suit and tie. So I still have my nice, thick leather gun belts for these occasions. But outside of the occasional dress up, this nylon belt has been getting regular use for years. It shows only minimal wear at this point and has really held up quite well.

(Original publish date is August, 2016 and I still use it often.)

The price point of many nylon belts can be more than you're willing to pay, and I can see why many people are skeptical to fork over their hard earned money on something that they might not know a lot about. In fact, this is one of the reasons (besides be just being somewhat stubborn) that I didn't try one of these belts out sooner.

But, Liberty Gun Belts somehow produces an incredibly well-built belt at a price that is below many of the other belt makers, and comparable to your traditional leather belt.

It's a great product made right here in the United States by a company who offers great customer service, and a great price … you can't go wrong.

6 Responses to Have You Made The Switch To A Nylon Gun Belt?