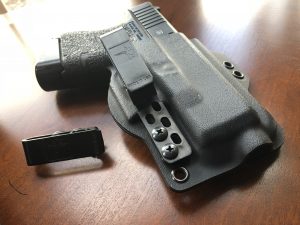 Yes, this is yet another kydex holster review. But before you move on, you might want to stick around and see why this holster from Bravo Concealment is different than all of the others.

Bravo Concealment reached out to me because they broke the Kydex holster mold with something different. Saul Cruz, Bravo Concealment's sales director, contacted me and wanted to know if I would give him some feedback on their holster line. He told me:

Whatever you think, good or bad, please just give me your honest feedback. We want to make a great holster and value your input.

I agreed and Saul sent me an outside the waistband (OWB) holster, and their flagship, the Torsion IWB holster.

The company approaches the holster market a little different than some others. First off, Bravo Concealment is not going to dazzle you with a bunch of different Kydex colors and patterns. You're going to get a black holster. And you won't have to select a bunch of different options either. All their holsters come pre-cut for an optic and flared for a threaded barrel. Really the only questions you need to answer are, left or right handed, model of gun, do you use a light, and do you want an IWB or OWB holster? I appreciate this straightforward and to the point process. 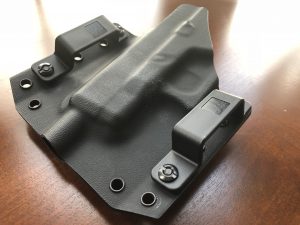 A great, no frills, straight-forward approach to holsters is what you will get from Bravo Concealment.

I don't typically wear an OWB holster, but there are definitely a lot of good reasons to own one. The BCA or Bravo Concealment Adaptive OWB holster is molded well, uses pancake-style belt loops and has a built-in curve that holds the gun very close to the body to aid in concealment. What I like about it, is that it's adjustable for a 0-10 degree cant. with an MSRP of $50.00 you get good value for your money. 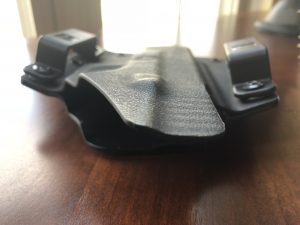 Even the OWB holster has a curvature that makes the gun more concealable.

If carrying extra ammo is your thing, you can pair your BCA with a single or double OWB mag pouch, made out of the same thick kydex used in the holsters.

The Torsion holster is where Bravo Concealment changes the game. Sure it's a Kydex IWB holster, utilizing two clips but it has an innovative design. Holster companies have installed wings/claws on the holster in order to twist the gun and force the butt to rest closer to the wearer's body. This is very helpful in concealment, as the major cause of printing is the grip of the gun poking out.

The Torsion holster is built with a specific curvature, that essentially does the same thing as the claw/wing device and pushed the grip toward the body. It may sound confusing, but take a look at the included photo, and it will all make sense. 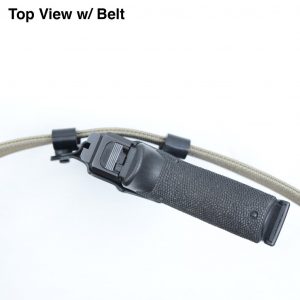 The built-in curve on the Torsion Holster is what makes it so effective at concealing the gun.

In addition to its shape, the Torsion holster uses some of the best belt clips I have seen. They are thick, have a good hook on the bottom, and rows of offset holes that allow for impressive adjustment. The holster does come with two clips but can be used with only one. I find the twisting effect to be a little greater when two clips are used, but the gun is certainly secure and concealable even with one.

All in all, I really like the holsters from Bravo Concealment, and the Torsion has become my primary EDC holster.

I have to say as far as concealability, the Torsion holster is up at the top of holsters I have evaluated. Both the IWB and OWB are formed well and allow for a crazy amount of adjustment in cant and ride height. The clips on the Torsion and loops of the BCA are stout and among the best out there. I like that they use Phillips head fasteners instead of hex screw heads. Bravo Concealment's straightforward and simple approach to the holster market means getting a holster that will fit your gun, which I like.

Which holster do you trust your life to? Let us know in the comments below.

What is Target’s Gun Policy?
Do NOT Join A Tactical Subscription Plan Until You’ve Read This