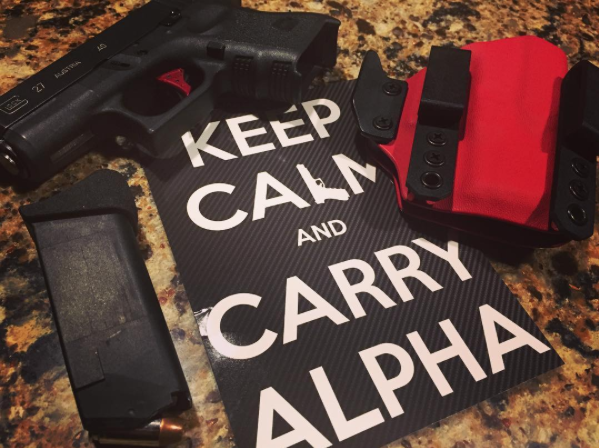 Kydex holsters are a dime a dozen so when I find a company that raises the bar with what I'm calling the most comfortable one I've ever worn; it is a big deal.  The company is called Alpha Concealment Systems and they currently have 5 models of kydex holsters to choose from, which cover a wide number of gun manufacturers.  I tested out their newest holster, dubbed ‘The Phoenix.'

The Phoenix is a kydex inside the waistband (IWB) holster that is made for guns without a mounted light.  If you do have a light mounted on your gun, they have you covered with one that is called ‘The Gryphon.'

The Phoenix is made up of one piece of kydex, two belt clips, and a wing. The two belt clips are designed to add more stability to the holster and keep it from shifting. The wing, on other hand, aids in concealability by pressing the pistol grip toward the wearer's body, rather than away from it, where it can show underneath your clothing.

The Phoenix can be ordered to accommodate an optic, extended slide stop, suppressor, sights, etc., and can be ordered with different sized belt loops.  There are many colors to choose from for all of Alpha Concealment's holsters, including The Phoenix. 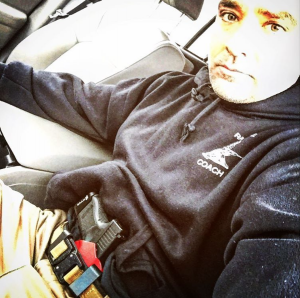 I test, evaluate, and present a lot of holster reviews to you, and have gone through many on my own that I have not shown to you.  Without speaking in hyperbole, this is the most comfortable and concealable kydex holster I have ever worn for appendix inside the waistband carry (AIWB).  I believe that the main reason why this is such a comfortable holster when compared to many others, is because it has two belt clips, as opposed to one.

This may not seem like a significant detail, but I believe this secures it to my belt in such a way that once I get it set comfortably, it doesn't move.  There is no shifting or adjusting whatsoever.  I absolutely love this feature, and I think it has moved me away from single clip holsters for that reason. 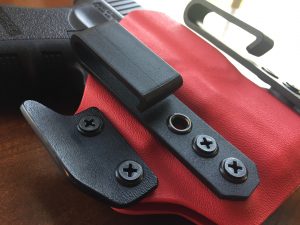 The wing of the Phoenix Holster helps to reduce ‘printing'

I believe this holster is so concealable because of the wing that is attached to the side of the holster.  This wing device is great for AIWB and uses leverage to push on the back side of the belt, which in turn pushes the butt of the gun against the wearer's body.  This really does make a big difference in concealability.  I can easily conceal my Glock 27 with an extended magazine base while wearing just a t-shirt.

Check out my video review, here:

I found that it took a while to get used to wearing a holster with a wing.  I noticed that I couldn't wear my belt as tight as I did without it, but even with loosening my belt ever so slightly, my holster and gun were very secure.  Once I made this slight adjustment I found the holster to be super comfortable and ultra concealable. 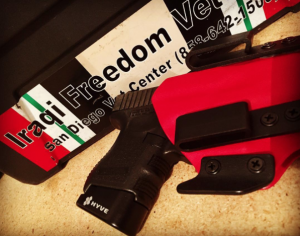 The holster is high quality and all the kydex was cut nicely with polished, smooth edges.  The included hardware is great and does not feel cheap, and I liked the fact that my holster was customized for my specific gun.  Not only was it molded to my model, like every other kydex holster, but Alpha Concealment made sure to ask if I wanted it cut for an optic.

I told them I had an extended slide stop, so they made sure to adjust for this.  I wanted this holster to have a sweat shield, which extends the kydex up to protect the gun from your body and they made that happen for me.  I also wanted something a little different from all my other black holsters, so I got a sweet, deep red color which looks killer. 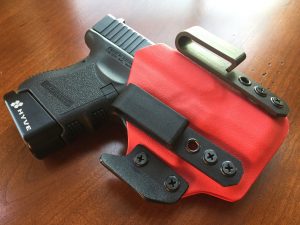 They have about a one month turnaround time, which isn't terribly long when you consider most holster companies take around 3-4 weeks to get you your holster. MSRP is set at a competitive $70.

Overall the customer service was awesome, and the product surpassed my expectations.  It has become my go to everyday kydex holster for AIWB because of its comfort and superior concealability.

Check out the holsters that Alpha Concealment Systems has to offer. 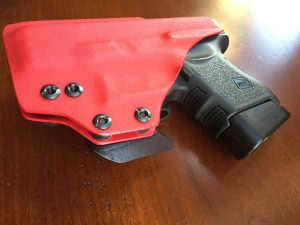 If you have questions about AIWB carry with the wing, and if it really makes a difference shoot me some comments below, or check out all the holsters we continue to evaluate for you.  Stay safe!

Episode 127: Neighbor Shoots Man Trying to Drown Twin Babies
Episode 128: How I Survived Being Shot in the Head – Part 1

Leave a Reply to Ron Click here to cancel reply.