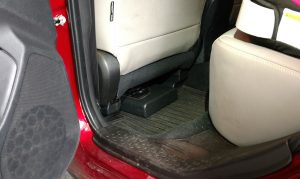 Shown here a safe under the seat of my SUV

Warning: There is a serious amount of snark in this article because stories like this anger me beyond belief.

A local Memphis, TN news channel has reported that over 1,200 firearms were stolen from vehicles this year alone. That is just from one city in Tennessee and I'm sure the number goes up much higher from there across the country.

Oh, and those are only the guns that are reported as being stolen, meaning that the real number is actually somewhat higher because I'm fairly certain that not all gun thefts are reported on.

Why does this matter?

Well, for one, if you leave your gun in an unlocked car you aren't too bright — and that is me putting it as nicely as I can. Second, you should only be leaving your gun in your car out of necessity, like if you have to run into court or something and you have nowhere to put your firearm.

Then, instead of stashing it in the glovebox of your vehicle, locking it in a container meant to hold firearms securely, makes a lot more sense. Yes it costs a bit more money to have one of these items, but if you have to replace your gun, which one costs you more?

In case it wasn't blatantly obvious, let's go over a few more reasons why you should lock your guns up if you must leave it in your car:

It may be hard to believe, but chances are excellent that the guy who broke into your car and stole your gun, whether it was locked or not, didn't do so because he was an outstanding, law-abiding citizen of these United States.

I'm gonna go out on a limb here and say that he's what is called a criminal. Sure, he's only an alleged criminal at this point, but the moment he broke into your car to take your stuff he proved himself to be a criminal.

Maybe he hasn't been tried in court, and maybe that title hasn't been given to him on an official level, but if he stole your gun from your car chances are excellent that he doesn't have good plans for it.

Your gun that was stolen from your car will now either be sold to a different non-law-abiding citizen who will commit a violent crime with it, or he will keep it for himself to use it however he wants.

Regardless of where it ends up or who has it, it won't be used how you wanted it.

Gives the anti-gunners a reason to complain —

If you're like me, the sound an anti-gun person makes when talking about why you don't need this rifle or that semi-auto gun makes you cringe. Well, every story like this that they publish makes us look bad … all of us.

It's almost like they're saying, these “law abiding citizens” can't even take care of their guns properly, let's take away their right to self-defense.

In other words, stories like guns getting stolen gives them more ammunition to use against us, or at least try to.

It costs you money —

Now I'm not a rocket scientist, but I'm pretty sure the way it works is that this gun that gets stolen from your car cost you money at some point. This means that it will cost more money to replace it.

I don't know about you but I'd rather spend that money on ammo or a different gun to add to my collection.

Here is what you should think about doing with your gun instead:

Buy a safe for your vehicle, here.

Self-Defense Against the Mob Has Changed
Episode 466: The Polymer80 Fiasco

One Response to 1,200 Firearms Stolen From Vehicles this Year in Memphis